William Archibald Spooner died in 1930, just four years before this competition (there were obituaries in the national papers that spoke of the way Punch and others lampooned him, and, inevitably, quoted one or two possibly genuine examples). But this, the first NS spoonerism competition, is notable for the brief mention of the hapless Warden, and yet the absence of reference to his -ism. 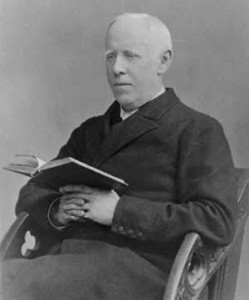 The setter is Seacape. It is like having a visit from the king over the water – he hasn’t been seen more than a couple of times in 1934. But here he is, with a patrician drawl, and with a chat about the old times (he notes that H.C.M. is familiar with this kind of competition from ‘the old Saturday Review days’). In fact, H.C.M. also says that it’s the hardest competition he has come across, whereas Seacape thought it would be ‘a nice little exercise in metathesis’, indeed something to be dispatched at the beach. But the extent of the problem may seem clearer when i tell you he’s asked for twenty lines and transposition of at least two words in every line. He quotes an extract from Punch:

I hate spoonerisms! They scramble my brain. I would rather do anagrams, and that is saying something.

The competitors jumble the words a bit too far. Seacape courteously thanks those who have given him ‘translations’ (gamesmanship!). He quotes a few, including

a hole in seven; dines in the shark (Miss G.)

he gives maize to the prune (Midas)

Guy Innes comes close, and the prizes go to two of Seacape’s vintage: Little Billee and Pibwob, neither of whom have had much luck as yet in the NS. What becomes clear is that a Georgian poem is actually ripe for spoonerising. The old system of putting competitors after their entries is restored. 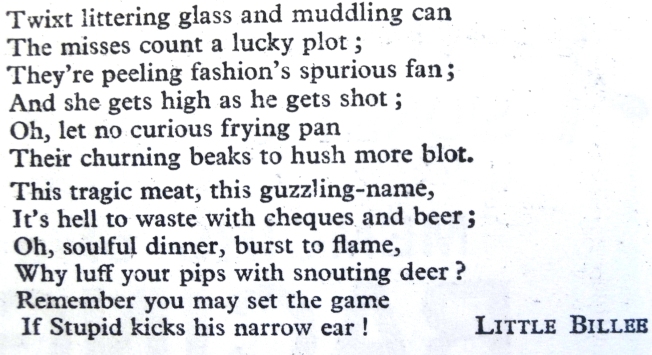 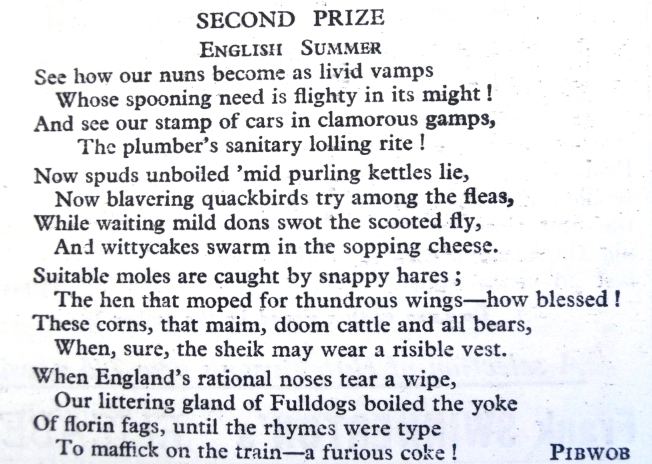 Although the instructions are a little hard to understand, Ivor Brown sets the first competition explicitly designed to twit experimental poetry. I think it’s pretty obvious that parody would have been better, but the competition has only dipped its toe into parody so far (although it is moving that way). The target here, I think, is Eliot, but more than Eliot, poets like Marinetti and Louis Zukofsky (explicitly mentioned, although mis-spelt), as well as the Sitwells. You can read a good article about Zukofsky here, and there are examples of his work (he spent his whole life composing a poem called A) if you scroll to the bottom of the article and click the links. 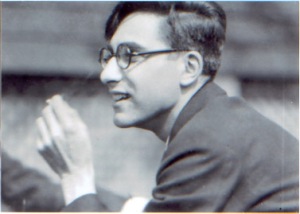 The competition is for a rhymed epigram on a very modern poet, who ‘having written what he believes to be totally cacophonous, unintelligible and unprintable’ finds himself praised as in the lyric tradition. It’s not very logical. A competitor who has been mentioned in dispatches, N.W. Hester, has his epigram quoted as best of the runners-up, who include Alice Herbert and also a Richard Thesiger (whom I believe to have been a civil servant, after the war in the Lord Chancellor’s department)

But the winners, who have the two and a half guineas split equally between them, so that’s 17s 6d each, are Michael Holland, Brice, and (it seems like a while since he’s won) Pibwob. 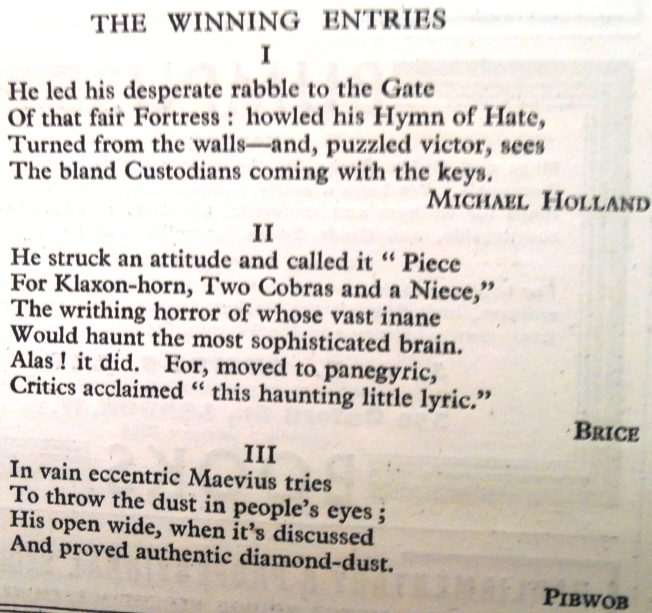 Richard Church asks for a three verse attack on a tyrant of the entrant’s choice in the style of Shelley’s attack on Castlereagh, that is, the one that opens

As I lay asleep in Italy
There came a voice from over the Sea,
And with great power it forth led me
To walk in the visions of Poesy.

I met Murder on the way –
He had a mask like Castlereagh –
Very smooth he looked, yet grim;
Seven blood-hounds followed him:

But the WR entrants are softies (a bit confusing though for Church to begin by writing My heart aches and a drowsy numbness etc.) – one chooses Stalin, one chooses a tax-inspector, one chooses a litter-leaver, one chooses his foreman, one chooses the Conservative Party, one chooses the family doctor, one even chooses Montagu Norman. Only four pick Hitler, who is a little bit more than the obvious choice. Perhaps, he muses, they were worried by a remark in his instructions about the dangers of libel.

Come the hour. T.E. Casson is handed the two guineas by trying to write like Shelley, about Hitler. The runner-up is Pibwob, who chooses ‘the road-hog’. 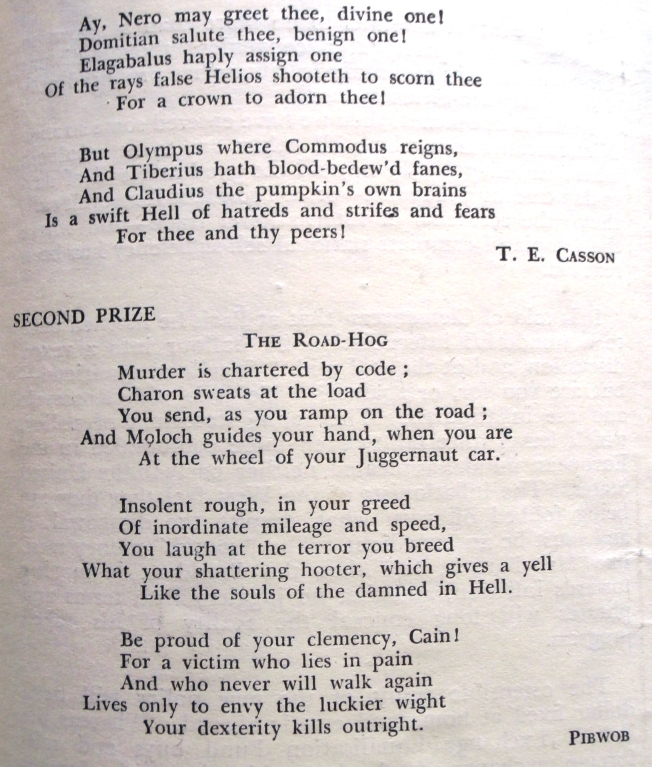 The B competition asks for a reply to a producer who wants a scenario for ‘The Life of D.H. Lawrence’. Half the entrants independently think up the not-hilarious idea that D.H. and T.E. will be mixed up (T.E. Lawrence was still alive – he died in May 1935). The two winners, A.H.Ellerington and N.B. take interestingly opposing views of whether a beard is a good idea (the actor ‘Gilbert Faversham’ is an invention, by the way). 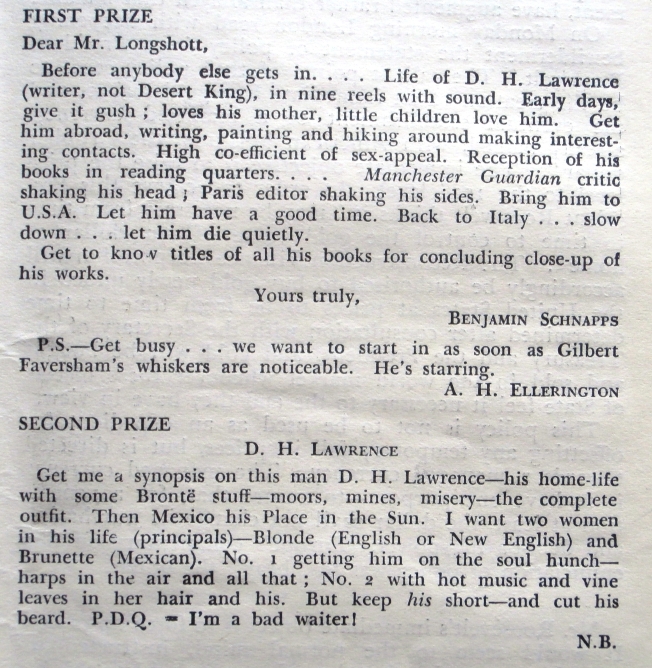 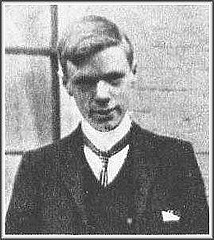 Lawrence before the beard 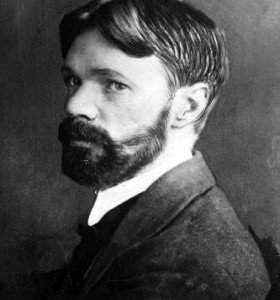 Frank Sidgwick is back, with a curious competition about punctuation and meaning. He imagines an eminent general dictating ‘It was the hardest day’s fighting I have ever known,’ and his secretary sending it to press, only for a printer’s reader to question the apostrophe, and for there to be a subsequent discussion between Secretary, Reader, General, Editor, Sub-editor etc.

The entries don’t really impress Sidgwick, since, he observes, no competitor has considered what was in the General’s mind. Sidgwick contends that we use ‘one of the’ to indicate a reservation, i.e. he’d had much harder days. Nor did anyone debate whether day was the substantive qualified by fighting or the other way round. (He asks, ‘Is a month’s holiday a holiday of a month or a month of holiday?’)

The report is quite short, with some reference to hyphens (it’s pretty obscure), and the second prize is withheld. Only Guy Innes gets through, commended for his realism. 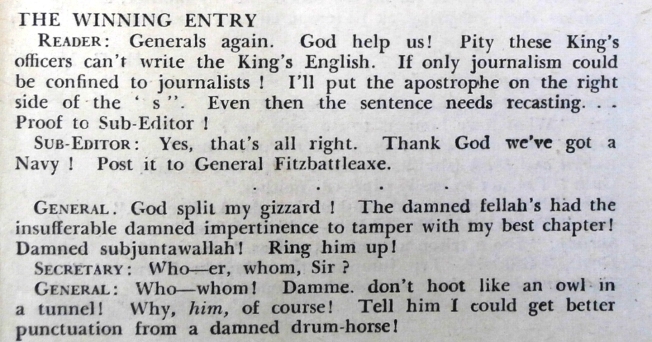 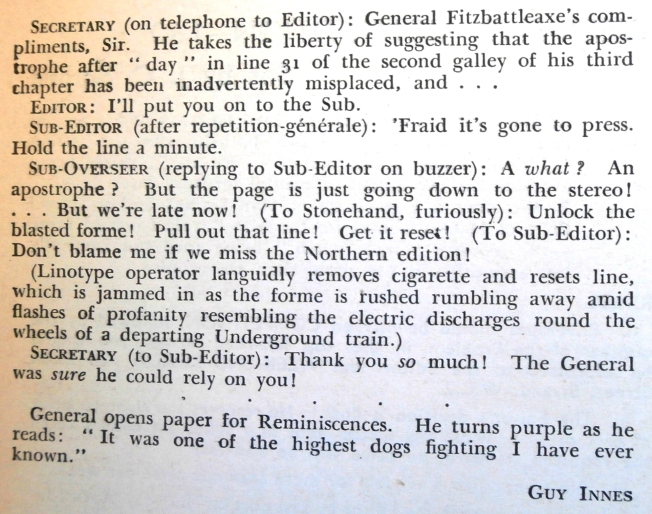 Here we go with the B competition:

At the Indignation Meeting of Animals to Protest Against the Use of their Names in Derogatory Metaphor by Humans, a lead was given by the city representatives – the Bear, the Bull, the Stag and the Guinea-Pig [how did the Guinea-Pig get in there?] Sidgwick wants the names of the other twelve protestants with (very short) reasons why they were protesting. 24 competitors submitted 282 animals (in 67 species) from Elephants to Nits. In order of occurrence: Pig (17), Cat and Dog (16 each), Ass (15), Rabbit (14), Rat (13), Goat (12), Fox and Sheep equal (10), Skunk and Elephant equal (7). There was one Beetle, and no Lobster (why would there be?). (Sidgwick adds that Lizard must be the latest addition to the list.)

Sidgwick admits to being bored reading repeatedly that Cats were tired of being tokens of mean and vindictive women. An entrant called Sedulous Ape is ticked off for writing 300 words where Sidgwick had asked for abbreviated reasons. Others abbreviated so much that they were incomprehensible. However, H.C.M. and Pibwob made it past the scrutineer: 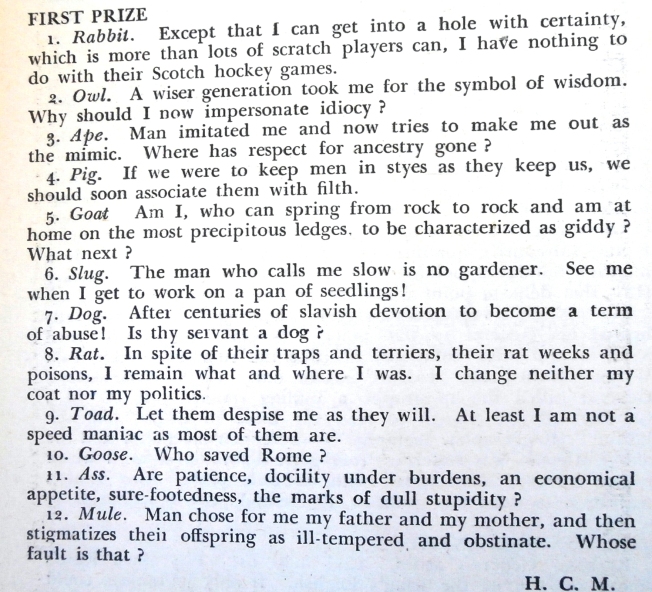 Philip Jordan asks us to believe that there is a Society for the Suppression of all Social and Civil Liberties and that a mix-up has sent its (nameless) chief supporter a letter of abuse, and a request to be their after-dinner speaker to A.P. Herbert. (Herbert, as noted in an earlier competition, was a great favourite with WR readers and judges, for his independence of mind and liberal and rational points of view.) This speech was to be delivered with Herbert’s customary urbanity (Herbert having accepted the invitation). Jordan berates himself for not spotting that speeches don’t often translate to the page, and also notes that Herbert is hard to mimic, despite the quantities of entries. It’s too complex a competition, I’d have said. Several have Herbert perversely accepting the position of chairman; one entrant called Arrow sends in a poem that rhymes ‘panties’ and ‘scanties’ (evidently a popular rhyme – it’s used in Forty-Second Street). Apologising for the low standard, Jordan lets E.W.Fordham and L.V.Upward take the moolah. 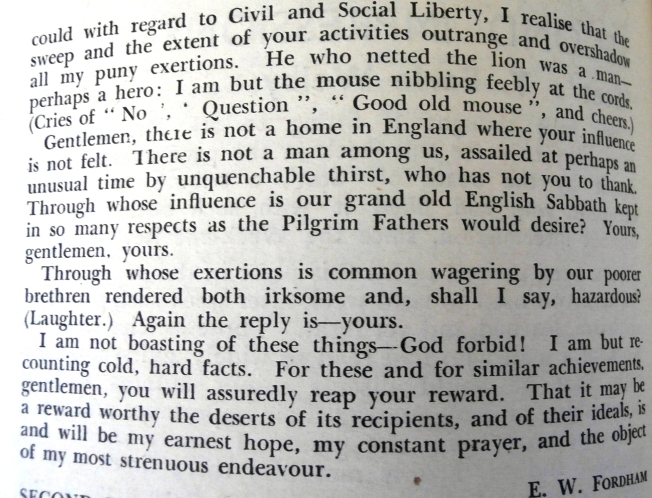 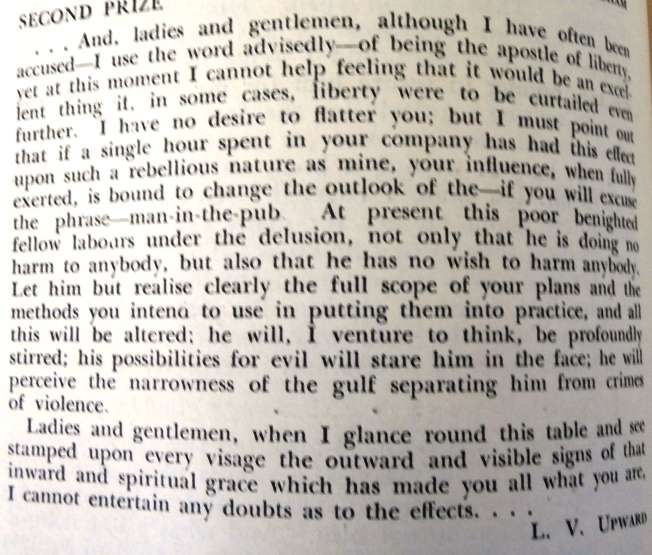 The B competition asks for an epigram on a fashionable wedding. Jordan receives shed-loads of these (‘what a cynical lot you are’, he says). Some competitors make the silly error of sending in eight-line epigrams …

The winners are Anthony Munday and Pibwob, although runners-up W. Leslie Nicholls and Brer Rabbit also get printed:

Munday is a new name, by the way, but is a pseudonym – it’s the name of one of Shakespeare’s contemporaries – see here.

Alice Herbert – only the second competitor since Lester Ralph to be given this chance, as he was almost exactly a hundred competitions earlier – gets to set and judge this competition. It is certainly over 40 years since judginging has been farmed out to a competitor (setting a competition has been a regular opportunity). She was about 73, and had only won a smattering of competitions, but she had regularly been a runner-up, and would seem to have entered each week. She lived in Hampstead, and may have known some of the WR writers, but the most obviously significant event had been the competitors’ dinner. She observes that many familiar similes are pointless, citing ‘right as rain’, ‘as good as gold’, ‘as safe as a house’ and ‘as pretty as paint’ as four that have lost their force and sense. She asks for replacements for the four, adding two of competitors’ own devising. Hardly anyone, she reckons, has a successful set of six, though she admires H.C.M.’s ‘as slick as a slogan’. With a sort of cheery reluctance she allows the prize to go to Sawdust Asgold (an unfamiliar name), with Issachar – a she, Herbert reveals – coming second, particularly for her first three.

The B competition is perhaps the first nod towards the rise of Fascism. A dictator, she suggests, has gained power in the country, and has suggested that the unemployed be eaten. Reactions? After setting the competition, Herbert writes, her pen ‘clove to the roof of my mouth’. She’s not being serious, but it’s a daft metaphor all the same. The ironists pitch in with H0dgson Burnet, Upward and L. Marsland Gander among the also-rans. But the winners are James Hall and Pibwob, neither of them newcomers to the podium: 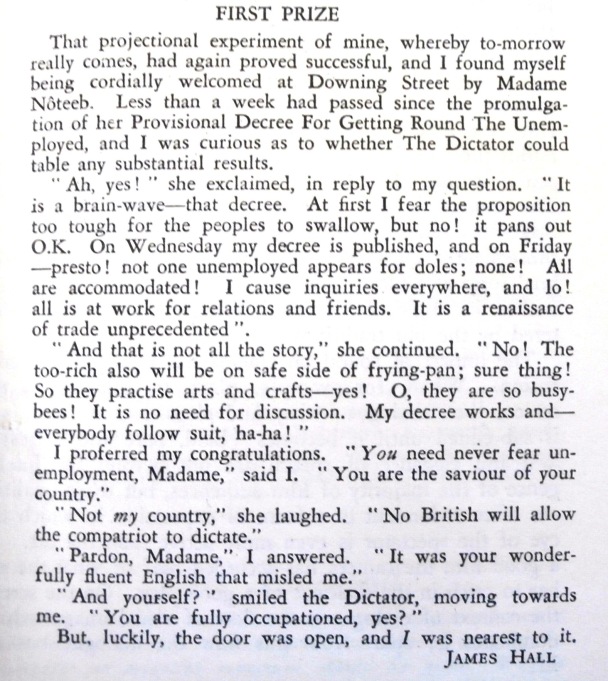 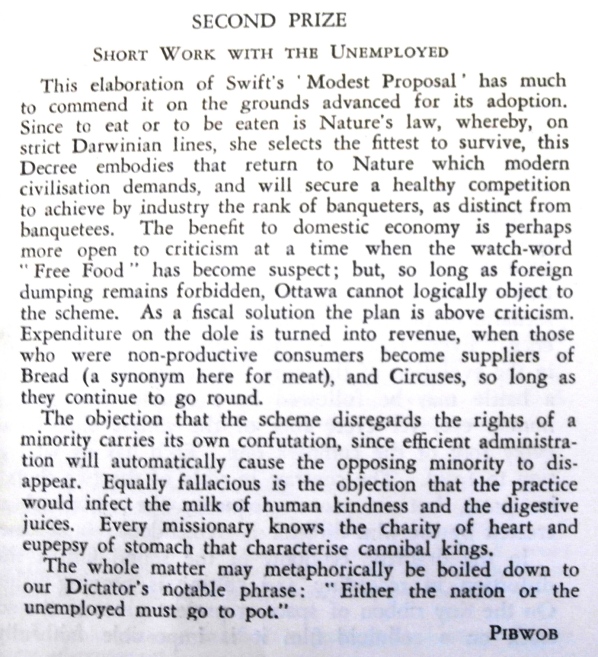 It’s February 27 1932, and the competition starts on its second hundred. Ironically, in that very issue, former New Statesman editor Clifford Sharp’s article ‘The Press And Contempt Of Court’ is published, the one that is to lead to a libel case that will bring the Week-end Review down within two years, and move it into the New Statesman fold, competition, ‘This England’ and all. 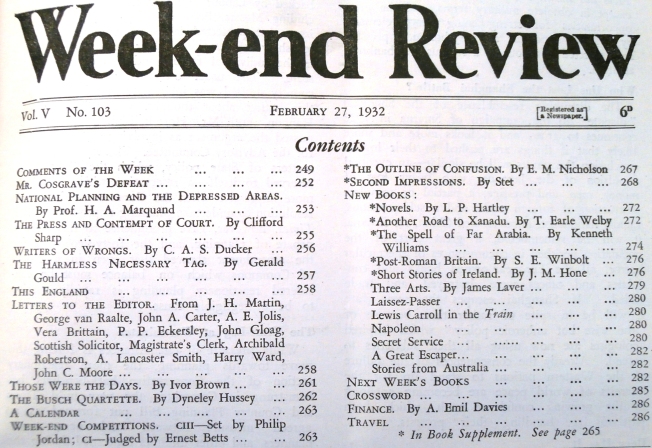 However, back to the competitions. Ernest Betts asks first for ‘a Song Before Breakfast by an Advertising Man’ (30 lines limit, any form). Commending the usual crew (Casson, Upward, Little Billee inter alia), he nevertheless notes that no-one produced a roaring song. But by putting ‘any form’, he has rather lost the power to discipline the competitors. He splits the total prize money of two and a half guineas between John Carter and Pibwob, each of whom have provided odes (which he can’t imagine advertising men breaking into, especially before breakfast). So, £1.6s.3d each to both winners: 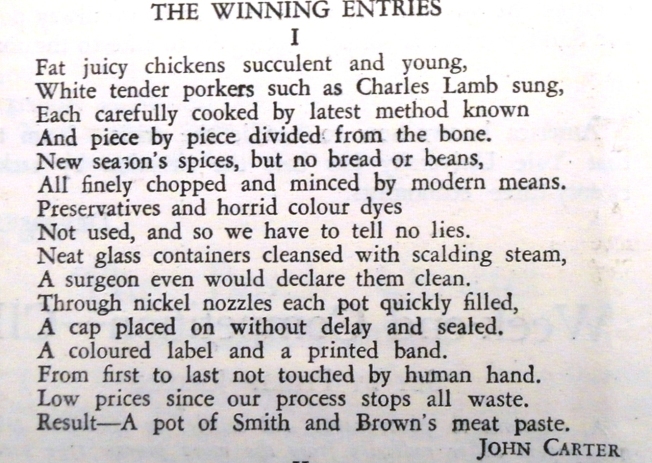 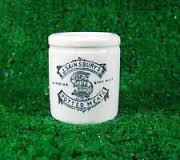 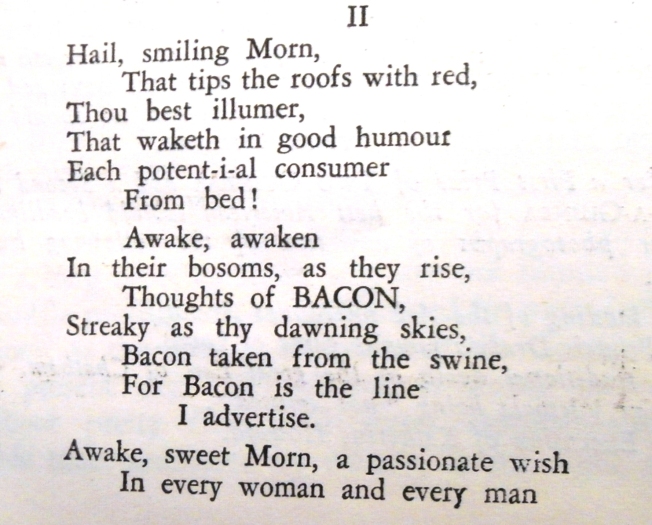 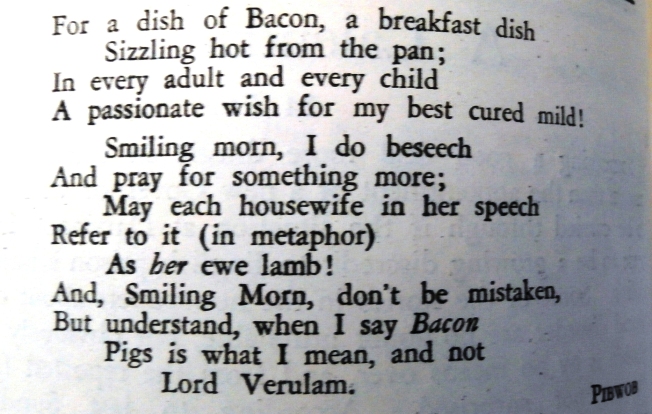 If you’re puzzling over the punchline, Lord Verulam was the title given to Francis Bacon …

101B asks for an imitation of Proust, no less (300 words max) – from the point of view of a gentleman of leisure on taking his first sip of sherry before dinner. (It is worth noting that much of Proust’s sequence of novels A la recherche du temps perdu was published posthumously after his death in 1931. The last part was not published until 1927, and the final section was only published in an English translation in 1931.) Freda Bromhead takes the guinea (it’s really good) and the remaining half-guinea goes to the almost equally worthy Seton. 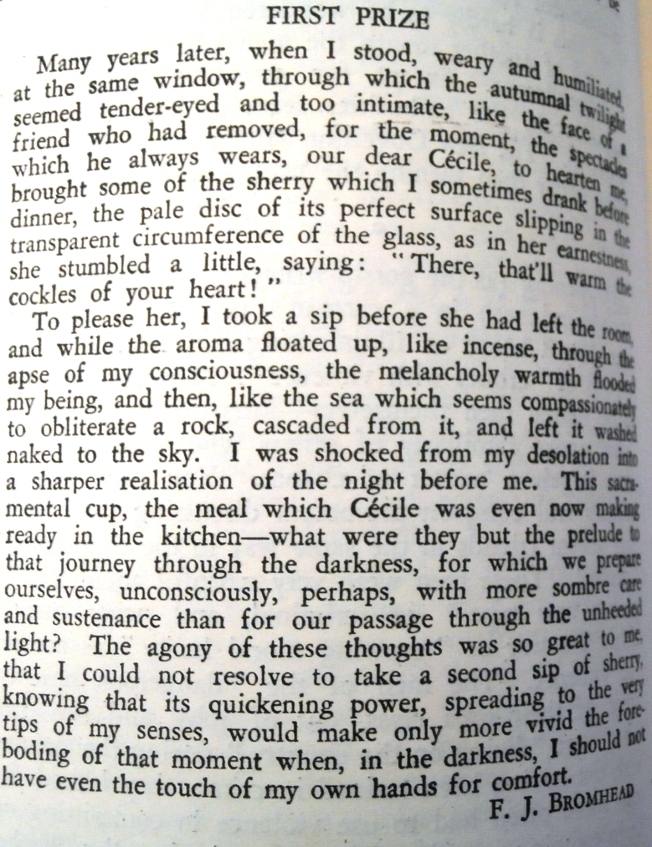 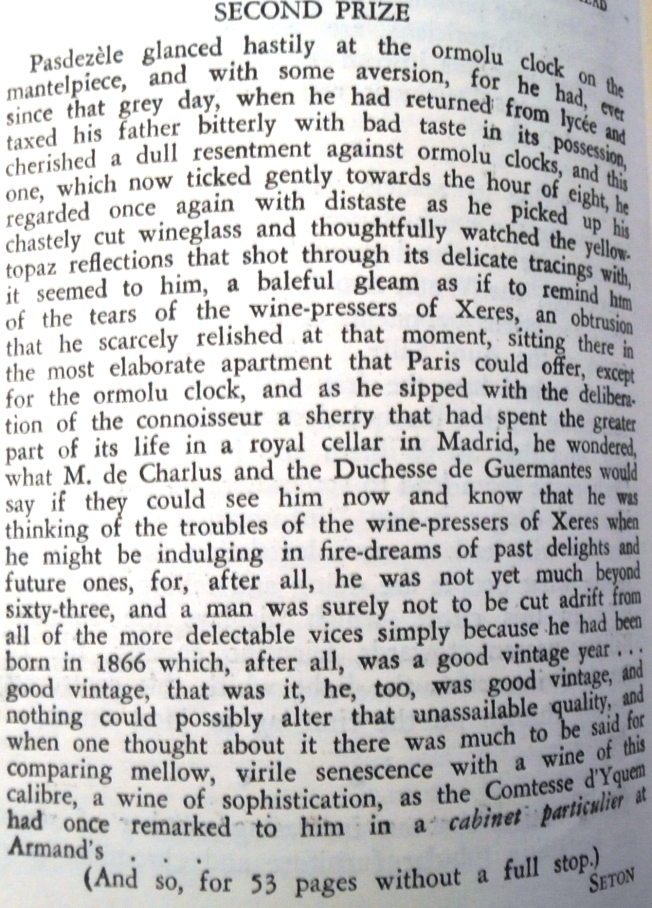