J.C.Squire amasses a huge postbag with his requests for ballades that have the refrain ‘I don’t know where the _______  ____ we are’. He is is driven to congratulating Lt Col H.P. Garwood, W. Leslie Nicholls, E.W.Parsons, and also (an unfamiliar name) Geoffrey Parsons, who, I suspect, is the lyricist who later (1954) co-provided the words for Charlie Chaplin’s melody ‘Smile’ (a song most associated with Nat ‘King’ Cole).

There are also commendations for William Bliss and “Seacape II” – who’s this then, Black Gnat bored with not being Seacape?

After considerable flannelling, Squire gives first prize to Mariamne, and second to Obispo, while admitting that he’s not really sure what the latter always means with his blanks: 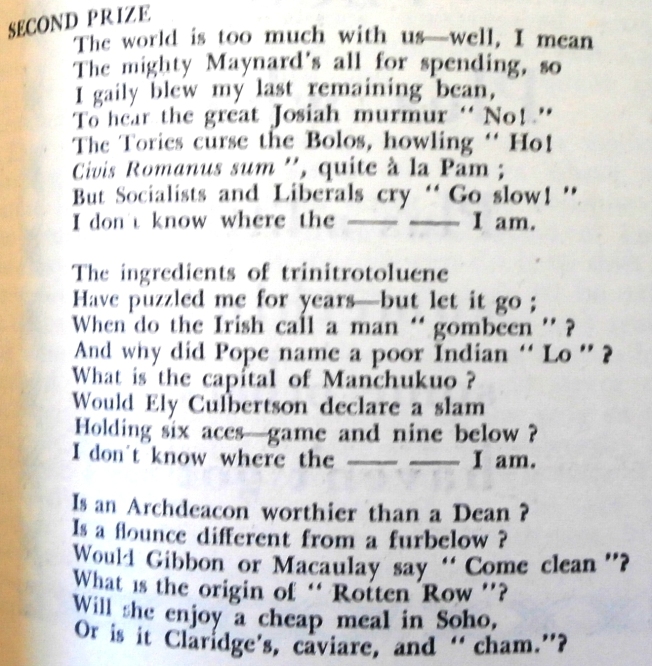 Ely Culbertson was a Russian with a surprising background, who popularised contract bridge, virtually single-handedly. There’s a piece about him here. 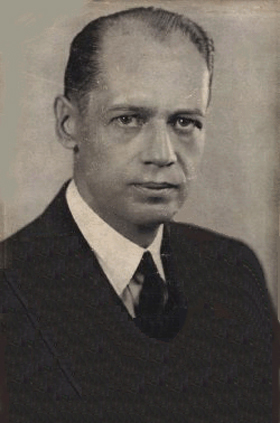 The B competition goes awry, but perhaps because Squire worded it wrongly. He wanted an example of a ‘purple patch’ of prose, but he meant an existing one, and instead received lots of examples of the genre. He decides to give Guy Hadley a prize for some very purple prose, and a runner-up prize to Muriel M. Malvern, who has quoted something, albeit in translation (this was originally held over for space reasons, but I’ve restored it).

A new judge, Alfred Wareing (a theatre producer of twenty-five years’ standing), asks for an account of what happened when Dr. Johnson negotiated the publication of Oliver Goldsmith’s The Vicar of Wakefield with a publisher. Did he drive a hard bargain? (Goldsmith wrote the novel in 1762-3, but seems to have been unable to do anything with it, so summoned his friend to help. Johnson sold it for £60 to a publisher (‘bookseller’ would be the right term then) called Newbery, and after it had finally been printed in 1766, it went on to be one of the most popular novels of that century. There is a famous painting of Johnson reading the novel (with Goldsmith’s creditors waiting on the result, which you can see here). Johnson had already advanced Goldsmith money that morning, and Goldsmith had already spent it on Madeira.

It seems a curious kind of a competition to me, but there we are. The entrants are pulled up for failing to refer to Newbery, and also for suggesting that Johnson lacked integrity. T.E. Casson and Seacape are in the frame but the winners are Non Omnia and Muriel M. Malvern. The former wisely chooses Boswell.

The B competition asked – and this has been done much more recently – for new examples of rhyming slang. Four entrants suggested a George Bernard for a jaw (I like that – he punched him in the George Bernard), and, among the other selected suggestions were these, some of which seem deeply unfunny (and this is the pick of the bunch!):

The winners are L.V.Upward and George van Raalte (so all four winners this week are regulars).

Ivor Brown has set one of the first competitions I would like to have entered. It is essentially the kind of news item that would fit the ‘This England’ column shortly to be started by Gerald Barry in The Week-end Review – hingeing as it does, as Brown points out, on the idea that children at 3.59 pm will be engaged in ‘infantile vice’ that will at 4.01 p.m. be re-classified as ‘acceptabe behaviour’. It reminded me of a notorious Conservative councillor on Exeter City Council, the governor of a local primary school, who thought that Hallowe’en should be banned at the school, and that so (in the same breath) should plimsolls.

The 14B competition, recreating Falstaff, would have been expected by Brown’s readers – he has already been spoofed in one competition for his obsession with Shakespeare. What he may not have realised when he dished out the half-guinea second prize was that its winner was only twenty, and I would guess not only the youngest winner so far, but among the youngest ever to have won a WR/NS competition.

T.E.Casson is still trying to win, and Brown claims that the standard is of a high and even quality. Hard to choose a winner. Yes, you guessed it: Seacape scoops the two guineas; and R. G. Brett, who is also becoming something of a serial winner, takes the bonus. (He is shown erroneously as R.J.Brett.)

Our popular seaside resorts are justly known to fame
For attention to appearances and keeping up the same,
With one eye on the money-bags, the other turned aloft;
And chief among the Sabbath-keeping spas was Lowestoft.

One day a ribald councillor, notorious for his larks,
Proposed that Sunday games be sanctioned in the public parks;
At first his horror-stricken colleagues turned him sharply down
But the irreligious gentleman had influence in the town.

For weeks and weeks the elders in the council chamber sat
And argued every aspect of the case this way and that;
And now the Ayes would prosper, and at other times the Noes,
But neither side could bring the long discussion to a close.

At length by dint of compromise, that saving British grace,
They hit on this expedient of disposing of the case:
They handed one park over to the Ayes and mortal sin,
Providing that from two to four no child should enter in;

The other park the Noes have and preserve, as heretofore
As places where the Orthodox can safely sit and snore,
And children, while their sires in sacreligious joys engage,
Can walk about and ponder on the evils of the age.

If I was being fussy, I would say that the first and penultimate lines are not in good shape, but then I won a competition yesterday – not in the NS – of which a higher proportion of lines seemed to me, in cold print, wonky.

Seacape has now won more than ten guineas, and we are only fourteen competitions in.

For R.G. Brett’s poem, I’m assuming we all know Mrs. Grundy is the censorious character in Speed The Plow. By? Yes, Thomas Morton? But I had to have a good think about Stiggins, who it transpires (I’d forgotten) is from The Pickwick Papers, in which there is a character called Grundy, too. That’s confusing. In fact, maybe that’s the Grundy intended.

Cry loudly, Stiggins, howl amain! And, Grundy,
Groan out a curse on these that shame your Sunday,
On all th’unholy wretches, who, to hurt you,
Have struck this lewdest blow at Britain’s virtue.
For in a park of green and guileless seeming,
The Evil Ones of Lowestoft are scheming
To play demonian games. Despite the menace
Of angry bells, there will the lustful tennis
Draw young addicts in falsely pure disguises,            (that’s a ropey line!)
Croquet and bowls will beckon with their prizes
To wanton elders, heedless of mortality,
And childhood’s bud will blast in criminality,
Drunken with swings and fierce with sandy digging
While bands tune every toe to worldly jigging.

The end is come. No more a pious father
May point across to France (or Flanders, rather)
And whisper of that sabbathless, benighted,
– Ah, worse, unEnglish land. He flies, affrighted
With backward-glancing brood, to Tulse Hill homeward,
And feels his country sinking Hell – and Romeward.

Now to 14B, Falstaff at Ascot, which Brown doesn’t think has worked. He rewards Lester Ralph for his Shakespearean puns, and also Muriel M. Malvern for her sense of the man, even if some of her puns were not Falstaffian (if you go to her page under Competitors, you’ll see that I think she is only 20).

I prithee, sweet wag, when thou art king, if the wenches allow thee, see to it that the baggages betake them to their short kirtles again, or that it rain not so roundly at Ascot. I tell thee Hal, what with plackets most vilely bemired about me, and that they apparrelled squirming like eels upon the fire, I was never so unmanned since I was a stripling as rabbit-gutted as thou art. If my new doublet be not as riddled as a sieve getting m to shelter, spit in my face, call me a shotten herring. Saving that all reverence for gray hairs and honourable poverty be quite washed out of thee by the rain, and the sack wert pouring down thy gullet, dost owe my tailor for twenty yards of good satin. But thou wert ever a scurvy companion and an ungrateful. Was it not old Jack that bade thee set thy father’s crown upon that same roan nag, whose name I forget? ‘Twas as lean as a rake, with a white fetlock, and won most royally. An thou outface me on that, ne’er say thou hast the face-royal, though barber ne’er won crown by the shaving of it.

… Give me a cup of sack … As you may know by my size, that I have a kind of alacrity in sinking; my feet sank in the ground; I was up to my ankles in mud; there was not a foot of dry flesh on my body; I sank to my knees in mud. Two men were killed by lightning. Zounds, I am afraid of this gunpowder thunder, though it be no more … Bardolph! … Four men were struck by lightning … A cup of sack, I say … The six men were found to be beyond human aid. Well, we cannot last for ever. I barely scaped drowning, a death I abhor.  If a man should speak truly, there was not an inch of dry flesh on the whole of my body. A plague of all such weather; I am as subject to heat as butter; a man of continual dissolution and thaw. I thoughtthe end of the world had come, and I was with the damned … A pox of this gout! for getting my feet wet plays the rogue with my great toe. I will turn discomforts to commodity: the prince shall furnish me with new clothes.