Gerald Bullett opts for a single competition this week, with prizes of two guineas, one guinea, and two half-guinea consolation prizes. That’s because the poems he has in mind are so long, I expect, despite his suggestion that he will reward brevity. . This is a fable competition. The instructions are so exhaustive that I’m not going to try to summarise them:

William Bliss and T.E. Casson get close, but the winners are Hilary, Seacape, Ciel and Pibwob, so this is an old hands’ competition. It is already Seacape’s fourth win of the year, and it’s still mid-February.

A new judge, Norman Collins, formerly an assistant editor at the OUP, but now literary editor under Robert Lynd at the News Chronicle, steps into the column. Collins was later to become famous, not only as a novelist (‘London Belongs To Me’) but later found success as the controller of the Light Programme (he was in charge when ‘Woman’s Hour’ started), as head of BBC Television in 1947, in time to take charge of the Olympic broadcasts in 1948, and one of the key people involved in setting up independent television in the early 1950s.

He asks firstly for the best replies to the following six remarks:

Both the winning pseudonyms are new: Seton and Animula Vagula:

Apparently there was a Soviet plan to create a hybrid that combined the cow, the sheep and the goat. The sceepgoat, perhaps, although seven entrants independently came up with ‘gowp’. Nothing seems to have come of it (although peek at this blog). Collins asks for a parody of Blake’s ‘Little lamb who made thee?’ The prizewinnres are another newbie, Lyn Carruthers, and Ciel: 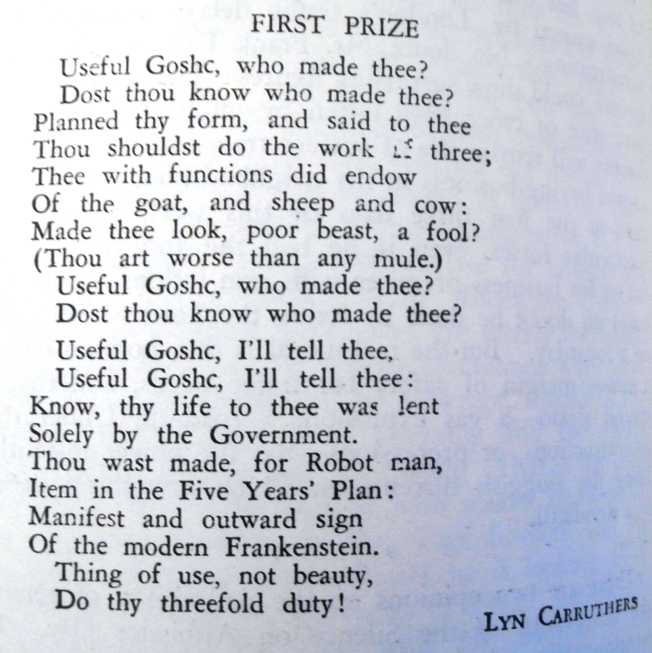 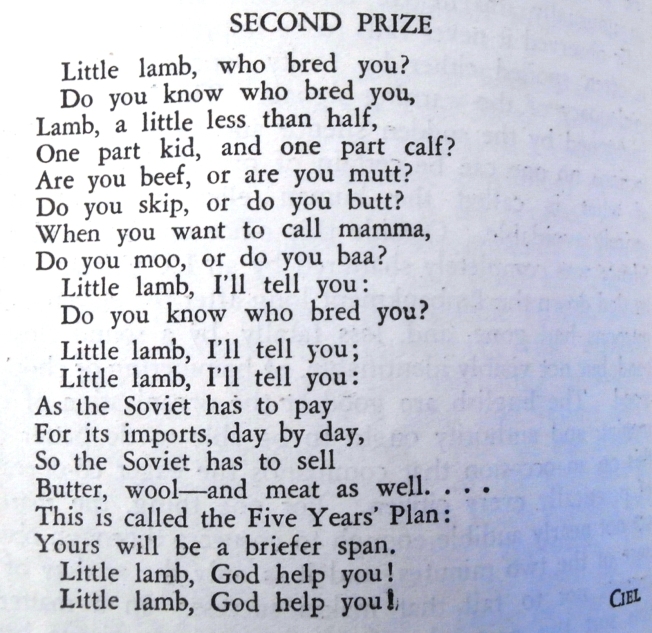 Sylvia Lynd is back in the judge’s enclosure, and her first, very wordy instruction has asked for two soliloquies from a day at the races, the first from a gentleman who has fallen in the mud but backed three ‘places’ and three winners. The other is from a gentleman who has lunched well, kept tidy and warm, and lost. She admits it’s based on her own experience, and that winning keeps her warm, while being warm but losing is dreary. The entrants seem, she says, to have assumed that the loser leaves as happy as the winner. Not so, she insists. As a result, the winners are George van Raalte and E. Pater (a new name): 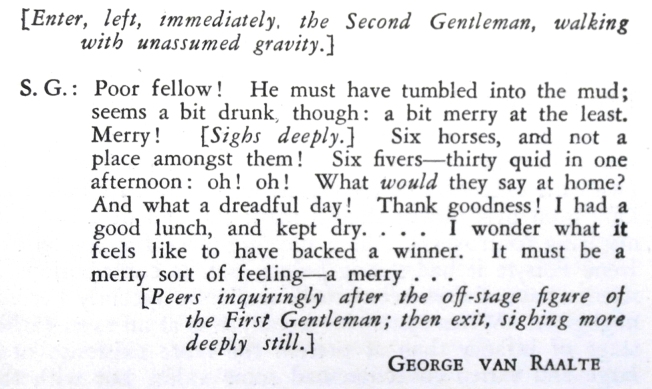 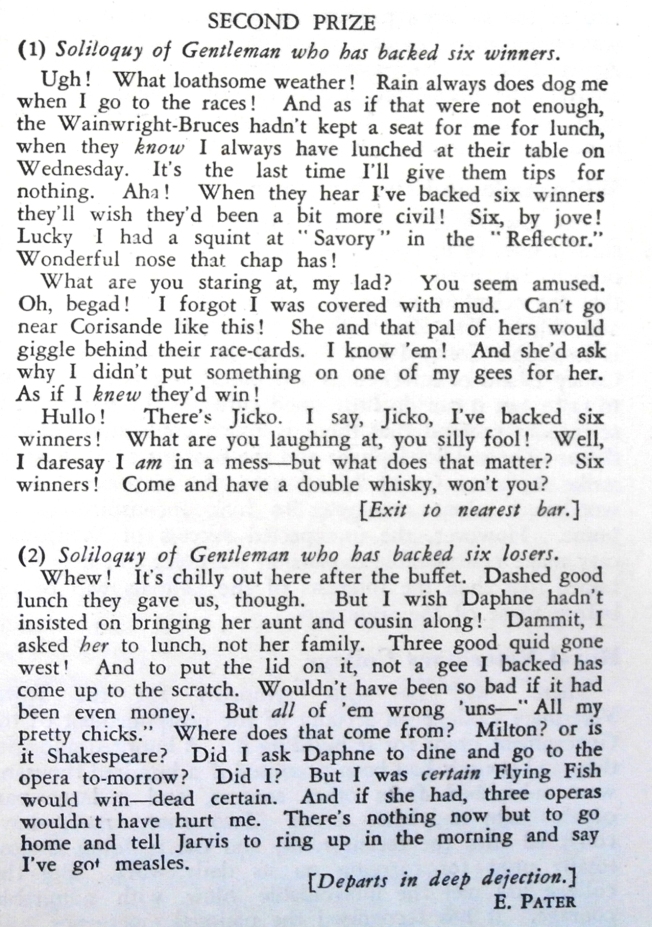 The second competition is for an epigram (shudder) on two snuff-boxes of Napoleon, one in the open air and one as a Roman emperor. This one bemuses me. Lynd is the first to divided the half-guinea prize so that there are two whacks of 5s 3d – but the winner is Seacape (ahead of Ciel, whose gender Lynd gets wrong, and the coming man, Little Billee). 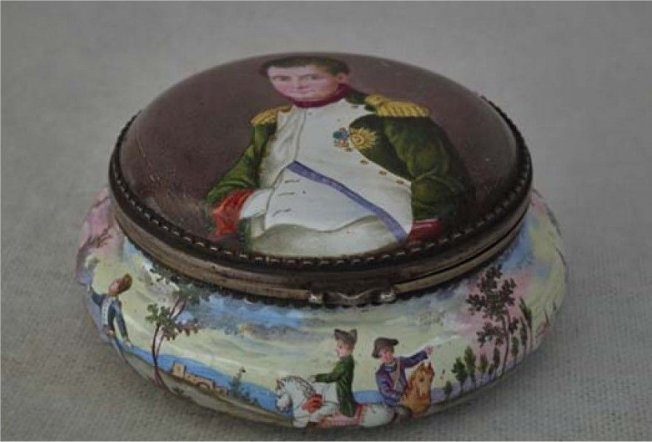 Ivor Brown throws the competitors a tricky one. They are to write an epitaph on the (stormy) summer of 1931, but are forbidden from mentioning the weather. Several tried to cheat, but were disqualified by Brown. One of the best near-misses (Seacape) involved rhyming a Latin word (cautum) with autumn, which strikes me as very neat indeed. The winners are Little Billee (on a roll) and Alice Herbert:

The B competition asked for an epithalamion on the nuptials (the fifth) of a film star called Joy Gloy, her latest husband a ‘dirt-track ace’. I’m not sure who Brown has in mind (Lana Turner and Zsa Zsa Gabor, who each clocked up nine marriages, were then 10 and 14, and had not started on their nuptial voyage), nor whether ‘joy gloy’ had the slang sexual connotation (semen) then that it does now, but I suspect it was an innocent invention. One of the runners-up is Cardiff-born W(illiam) A(rthur) Rathkey, then 29, and later a writer and in particular librettist. But the winners are Ciel and James Hall:

J.C.Squire, noting that the newspapers are forever telling us about surprising nesting places for birds (e.g. robins in pilar-boxes) asks for the best dozen places for nesting-birds crazed by publicity. He is not surprised by the many Wrens at St. Paul’s, nor Storks in sundry nooks of Marie Stopes’s home, but he hadn’t seen George Bernard Shaw’s beard coming. He liked gags like a stone-chat nesting in a pneumatic drill, but his difficulty was finding a good set. Many familiar runners up include Innes, Upward, Bliss and Hodgson Burnet. But the prize-winner (again) is D.B. (Sir M[aurice] Hankey was the Cabinet Secretary and Clerk to the Privy Council, positions he held until 1938, shortly after which, and almost without precedent, he spent some of the war years as a member of the Cabinet itself; I’m guessing that Tatts is Tattersall’s, the horse auction house in Newmarket).

The runner-up is Ciel, and I prefer her entry, myself:

The B competition is for a sonnet on Reno, Nevada. 1931 one was the year that Reno introduced more liberal laws on divorce and on gambling than anywhere else in the world. Nevada had secured its place as the gold-mining capital in the world (and is still third only to Australia and South Africa. A public competition for an apt city slogan had been won by the phrase ‘The Biggest Little City in the World’.

Seacape is the winner, and that once again means that Pibwob is the runner-up. It is starting to be tempting to suggest they are one and the same.

Martin Armstrong – and ready yourself, this is a red-letter day in one hitherto unhappy household – sets two competitions. 62A  points out that Sir J.C. Bose, the Indian scientist, has shown that vegetables are affected by stimulants, poisons, shocks and other ‘ills and good that man and beast are heir to”. It asks for a lyric (max 18 lines) rebuking the vegetarian for cruelty to vegetables. 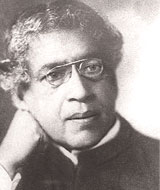 There are many commendations, mostly the regulars (Chauve-Souris, Seacape, Issachar, Gertrude Pitt, W. Hodgson Burnet, H.C.M. – and also an M.J.Dickson who is probably the literary scholar who contributed to English Studies in 1931). In the end, Armstrong actually draws lots, and the top prize goes to a new name, Nosnikrap (i.e. Parkinson spelled backwards), while L.V.Upward takes the half-guinea: 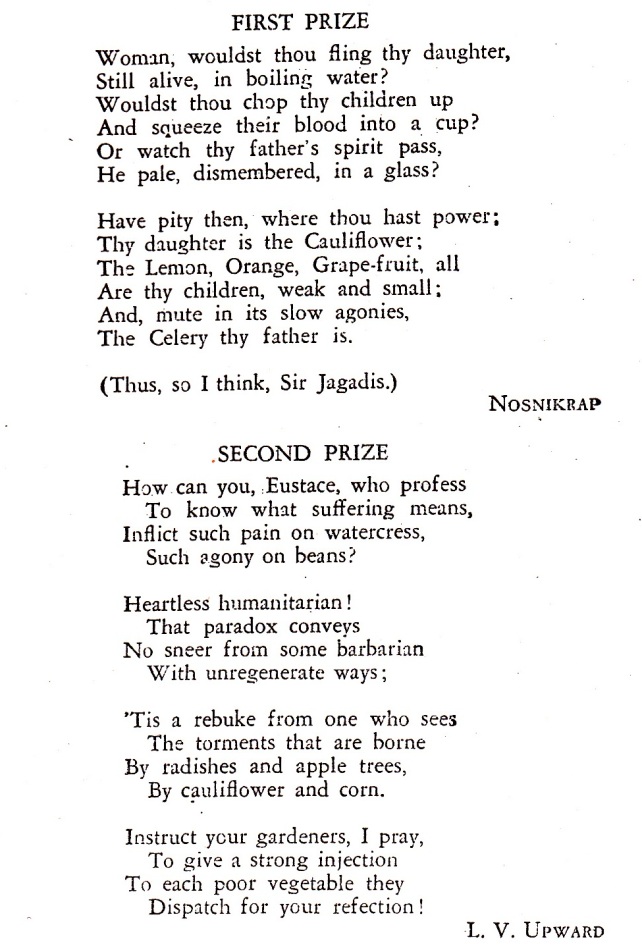 62B quotes Pope: ‘For what I have published, I can only hope to be pardoned; for what I have burned, I deserve to be praised’ – in the preface to his Poetical Works

Armstrong wants this statement rendered into epigrammatic verse. While he is judging it, however, it occurs to him that Pope has trapped himself into something of a solecism – ‘he did not mean that he deserved to be praised for the verses he had burned, but because he had burned them, a very different matter’. Always nice to catch the top dogs out. He says he hasn’t penalised anyone who has committed a similar lapse. Five make the winners’ enclosure, and after discarding Guy Innes, Mariamne and John A. Bellchambers – the latter is John Archer Bellchambers (1866-1945), a lawyer’s clerk in 1911 in Islington – he arrives at two winners. Firstly, Ciel. She is joined by, after over 55 attempts, T.E.Casson, who finally gets more than honorary mentions and nods and even rewardless entries being printed. He gets his half-guinea at last!

Armstrong prints Innes and Bellchambers as well, as the proxime accessits – something being done slightly more frequently now.

T.E. Casson is Thomas Edmund Casson (1883-1960) who was born (and died) in the Ulverston area. He can be found contributing to scholarly literary magazines from 1909 onwards, and in 1914, he had a collection of poems (Masques and Poems) published. He had a further collection of poems published in 1930 (Lord Derwentwater’s fate and other poems), a collection in 1938, simply called Poems, and George Fox, a poem in twelve books in 1947. All four appeared under the name Edmund Casson. Under the name Thomas Edmund Casson, he had published, in 1927, A Century of Roundels, on the centenary of the Oxford-Cambridge cricket match (he seems to have been an Oxford graduate, given the journals in which he is published). However, he does also publish his poems (e.g. in Poetry Review) as T.E.Casson, and he also publishes a book on Thomas of Kendal under this name in 1935. All his books are published in Kendal.

Martin Armstrong, back for his third stint, asks for a four-stanza parody Scots ballad on the subject of ‘The old woman who lived in the shoe’. He has a colossal entry, almost all of it printable. He describes himself as a water-diviner who has stumbled on a thousand-gallon-a-minute Pierian Spring. The winners are new names (the first is to be quite a regular), Ciel and I-hope-to-speed. However, one of the runners-up is an interesting name: W. Hodgson Burnet. No relation to the author of The Secret Garden, who had two ts, he would be a familiar sight in these kinds of competition, since he appears in the 1904-1907 anthology of competition winners from the Saturday Westminster, with three entries (and indexed just below another keen entrant, Brooke, Rupert).  Burnet was born in Edinburgh in 1873, and was articled as an architect to Thomas Edward Collcutt in 1894. In 1900 he moved to the office of William Wallace, and in 1902 to that of Sir Ernest George prior to obtaining a salaried post in H M Office of Works. He started a small private practice in 1904 while still at the Office of Works in Storey’s Gate, London. He was admitted LRIBA on 20 March 1911. He was a frequent contributor to ‘Punch’, the ‘Morning Post’, ‘Passing Show’ and ‘The Referee’, and he also had four parody collections published: ‘Quite So Stories’, ‘Gullible’s Travels’, ‘The MP’s Garden of Verses’ and ‘The Rubaiyat of Omar MP’. As we’ll see, it won’t be long before he wins.

However, here are the two who beat him to the punch:

30B – an epigram (they ARE fond of epigrams!) on Byron also brings a number of proxime acessits, including – just to prove to you that the WR circulation was not entirely southern – one Hilary Loraine Heelis, the son (despite the implication of his names) of a Westmorland priest, and a former officer in the Lancashire Fusiliers. We also have the author Francis Lawrance (sic) Bickley (1885-1976), another survivor of the First World War, one of whose short poems was much anthologised, from 1917 onwards –

We challenged Death. He threw with weighted dice.
We laughed and paid the forfeit, glad to pay –
Being recompensed beyond our sacrifice
With that nor Death nor Time can take away.

For the first time the two closest runners-up, one of whom we have met before, are published with the winners N. Macleod and ZN (sic) (who split the one and a half guineas equally).