Ivor Brown sets the competitors the task of writing a sonnet on the Strand. The Week-end Review‘s offices were at 24 Essex Street, just off the Strand, and, as Brown admits, about half of the dozens of entries strayed to no. 24 and knocked on the door. Alice Herbert, encouraged by her success the previous week, is among the commended, as are Gertrude Pitt and a number of other regulars. But the winners are Guy Innes and Seacape. Innes is probably the Australian journalist who was living in London in 1931, and who (much later) is recorded as having suggested to Patrick White that he (White) would do his writing no end of good if he returned to Australia, something that White remembered and later agreed with. 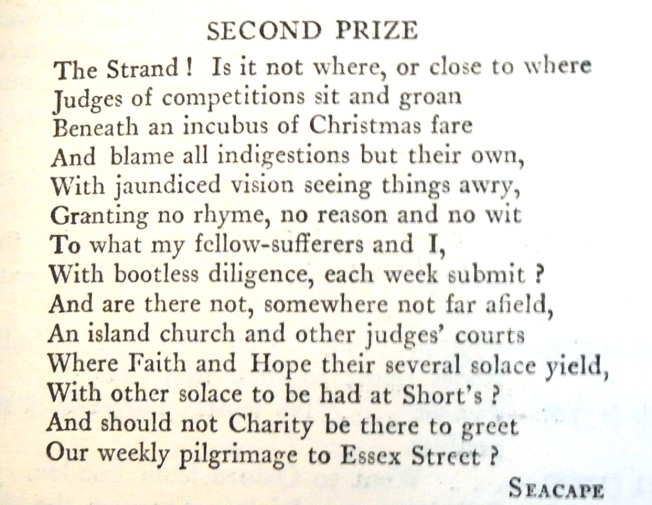 46B wants a lyric about ‘Araby’ that would fit into the talkies. Since Valentino’s The Sheik in 1921, there had been no end of ‘Araby’ films, including sequels and spoofs, both in the silent film era and into what was now the ‘talkies’ era. The song The Sheik of Araby was recorded by many, many artists (in fact, even The Beatles recorded it at the start of their career). 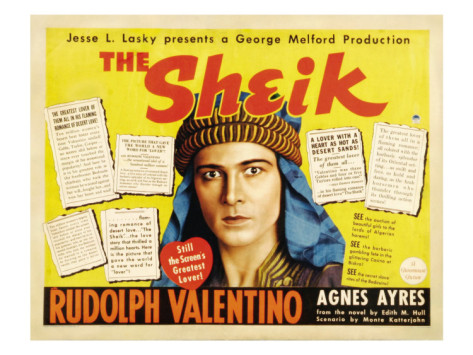 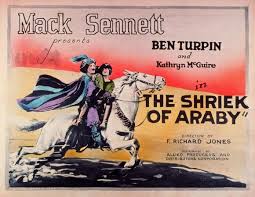 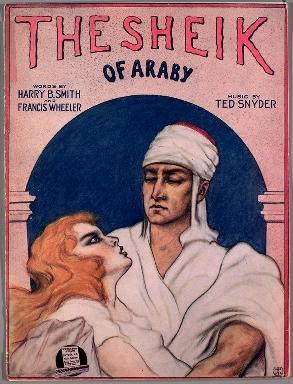 T.E.Casson (and Seacape) slip up because they write poems, when Brown wants lyrics. He is a tough and erudite taskmaster in this, too: ‘The theme-song must come from the heart, the satiric touch being given by sending it, after this cardiac origin, round by the Hollywood brain. There ought to be Romance… but there ought to be, along with the high flight, the little back-slide into vulgarity …’

The first prize-winner, V.C.C-B. (surely he would have been recognisable with that combination of initials?*)(* problem solved – see George Simmers’ comment below, and also a link to a photo) is new; the second is the most successful female competitor so far, Belleverte. Brown precedes the winning entries with a brilliantly bad pun: Sheikh stoops to conquer.

J.C.Squire returns with a competition that was common in the pre-war years, but rare later on in the cycle. Competitors had to find a truly bad piece of writing by a well-known writer, who had to be dead. ‘Incompetence of language’ and/or ‘inanity of content’ were requested. Here are the also-rans: extracts from

Sesame and Lilies (Ruskin)
An Outcast of the Islands (Conrad)
an extract from Macaulay’s essays – T.E. Casson still trying to win
Pendennis (Thackeray)

– and the London bookseller Harold Mortlake, later world-famous,  is also mentioned as just out of the running

But the winner, to whom a guinea-and-a-half exclusively went, was Leonard Jordan with an extract from Henry James’s ‘The Book of France’ (1915), of which I have never heard, but which goes like this:

One desperate sentence looking for a way out.

However, I think I could have won this competition with an extract from a Hardy novel – Hardy had only died two years earlier, so he would have qualified with this masterpiece from The Return Of The Native, Chapter 1

It was a spot which returned upon the memory of those who loved it with an aspect of peculiar and kindly congruity. Smiling champaigns of flowers and fruit hardly do this, for they are permanently harmonious only with an existence of better reputation as to its issues than the present. Twilight combined with the scenery of Egdon Heath to evolve a thing majestic without severity, impressive without showiness, emphatic in its admonitions, grand in its simplicity. The qualifications which frequently invest the facade of a prison with far more dignity than is found in the facade of a palace double its size lent to this heath a sublimity in which spots renowned for beauty of the accepted kind are utterly wanting. Fair prospects wed happily with fair times; but alas, if times be not fair!

Squire has saved some prize money from 33A for 33B, for which he’d asked for a foxtrot lyric which urged you (singular or plural) to ‘get back’ to somewhere not in America, but England. He gave three examples: Bootle, Ugly and Wigwig (Shropshire), hazarding the lyric ‘Won’ ya come and be ma pig-wig in ma wig-wam at Wigwig’.

The trouble is that Squire can see what will work rather better than his competitors, who let him down (that’s the feeling). In the end there are only two prizes, and a mystery hangs over what became of the additional moolah from 33A. The winners are Belleverte and R.J.B. (is the latter R.J.Brett?) 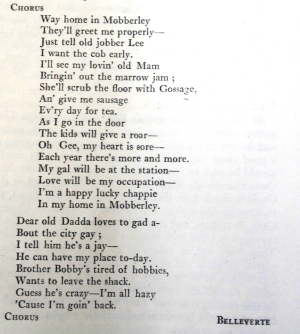 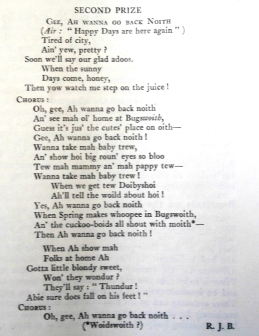 I strongly suspect R.J.B. is a southerner.

Ivor Brown has asked for poems up to 20 lines long entitled ‘Affectionate Lines To My Landlord’. The expectation were that these would be very tongue-in-cheek: legislation during World War One had capped rents to prevent landlords profiteering, but the regulations easing rents ran out six months after the war finished, and legislation throughout the 1920s had made matters easier for landlords, who found it quite easy to fleece or threaten their tenants. (Having said that, it’s not 100% clear to me that Brown is taking a liberal line on this.) In the event, some of the entrants (not W. Hodgson Burnet, it seems) simply took the title as an unironic excuse for a poem. Brown chooses James Hall, one of the most regular winners, for the top prize, and a gentleman called W.G. (William Guy) Nott-Bower for the half-guinea. Nott-Bower was a Liverpool-born, London-based civil servant whose secretarial skills were much in demand in the 1920s in a series of inquiries, so this must have been a pleasant change. He was 40 in 1930.

Here are the two top poems 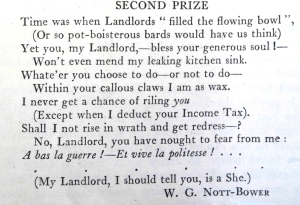 Is it me, or do these two poems suddenly start to sound much more contemporary?

32B: ‘One Frenchman is a causeur; two Frenchmen are a liasion; three Frenchmen are a marriage’ – similar sorts of arithmetic required. (This one has been revived on several occasions.)

The winners are Belleverte (a she, by the way), and L.V.Upward. The former is ticked off for being weak on China; the latter ditto on America.

George Blake, a notable Scots writer, coming to the end of an eight-year stint in London, has asked for an English rendition of a Burns poem, but admits that the southerners cannot match the spontaneity of the original. Poet and critic T.E. Casson misses out again. Instead, the first prize goes to the ‘flattish, faithful and simple’ version by … Seacape. Seacape has become that inevitable tortoise to the hares around him: when all others are unexceptional, he has a quiet, probably smiling suggestion:

Robin mowed my father’s field,
With him I’d be going,
Scythe or sickle had I none,
Yet we two went mowing.

I went up to London Town,
There to ply my bobbin;
Standing at my father’s gate,
Who met me but Robin?

Robin he was bold as bold,
I was weak as water,
And alas! he played me false,
Me, the farmer’s daughter.

Robin vowed he’d cherish me
Through the coming winter;
All he had was feathers three
And a whetstone splinter.

Second prize goes to H.B.C. – ‘her false rhymes in the folk-song manner are pleasing’, says Blake.

Robin in the harvest field
Hired me for the binding
Ne’er a shearing hook had I
But followed fast behind him
Sing a derry derry down,
In the yellow barley.

To the bleaching field I went
With a web I’d woven;
Who shoould meet me on the green
But my handsome Robin?
Sing a derry derry down,
In the yellow barley.

Wasn’t he the daring lad
To court the weaver’s daughter?
Played her such a saucy trick
When round the waist he caught her?
Sing a derry derry down,
In the yellow barley.

Robin promised me he’d send
Flour to last the winter.
Nothing had he but his scythe,
His spaniel and his dimple.
Sing a derry derry down,
In the yellow barley.

12B is a competition that turns up about once every two years to this day – competitors are asked to parody contributors to the magazine (sometimes, although not in this instance, ‘writing’ each other’s columns). The two targeted by Blake were T. Earle Welby (‘Stet’), who was known for his tendency to harp on the merits of late Victorian poets; and Ivor Brown, who was mildly addicted to puns, but even more addicted to references to Shakespeare, particularly Hamlet. (Brown was the drama critic for The Observer.) However, after allowing that there are one or two good phrases (even Seacape gets an honourable mention), Blake eventually puts into action the rule about there being no obligation to publish. A new competitor, Belleverte, squeezes in with a parody of Brown, but there is no second prize (that extra 10s 6d given away by Humbert Wolfe has been reclaimed!)

‘Brown’ has been given the unpromising subject of ‘Third Party Risks’:

It should be legally ensured that all who go down the road in cars are insured against third-party risks. Even the skilled Phoebus who drives his Sunbeam through the terrestrial smoke-clouds may be set dreaming, and discover one day that he has inadvertently overrun some poor mortal’s coils. Yet for him the insurance companies are prepared to play the rich uncle. And the hyperbolical speed-fiend, to whom the lounger by the pavement’s brim a simple victim is to him, will find he has nothing more in his bank balance after paying compensation, if he is not insured. Every rich man knows that journeys end in chauffeur’s boasting and that the spirit of friendly rivalry instilled by the good old school of motoring may lead to a master’s meeting in the coroner’s court.
Then the commercial gent. He who drives a car all day may live to realise that insurance is the best policy to carry in his pocket. Besides, which of us is safe? When the frenzied sports-car merchant’s not a-sporting he may have to tak’ the high road on foot and be run down by a lawless linsey-Wolseley brother of the speedway. If his runner-down be not insured, our friend may spend the rest of his crippled days in the poorhouse, telling mournful numbers of his empty dreams. So if it were done when ’tis done, ’twere well it were done by return of post. Even M.Briand believes in insurance against third-party risks …

The word ‘party’ in the last sentence was actually printed as ‘parity’, but if it’s a pun, it’s too complex for me. Briand was the eleven-times French prime minister (and Nobel Peace Prize winner) whose final government had concluded the previous year, and the reference is probably to Briand’s fondness for pacts and treaties to ensure that there was no war.