Returning after a while, Vita Sackville-West says she regrets that H. W. Fowler’s A Dictionary of Modern English Usage hasn’t included, for example, a section on ‘purple prose’. She asks for a section of 600 (600!!!) words that might get into a future edition. Fowler – Henry Watson Fowler – had published his book in 1926, and had died in 1933, i.e. a year earlier.

In her adjudication, Sackville-West wonders if she’s not been clear enough. All but four entrants ignore the ‘for example’ and produce entries on ‘purple prose’ or ‘purple patch’ (one of the runners-up is Allan M. Laing on ‘Americanisms’, which, alas, is overlooked). Fowler is not at all easy to parody – he is scholarly and subversive, and a great read.

Lester Ralph grabs the two guineas with a definition of ‘purple patch’; Eremita comes close behind with ‘Pulpitry’. 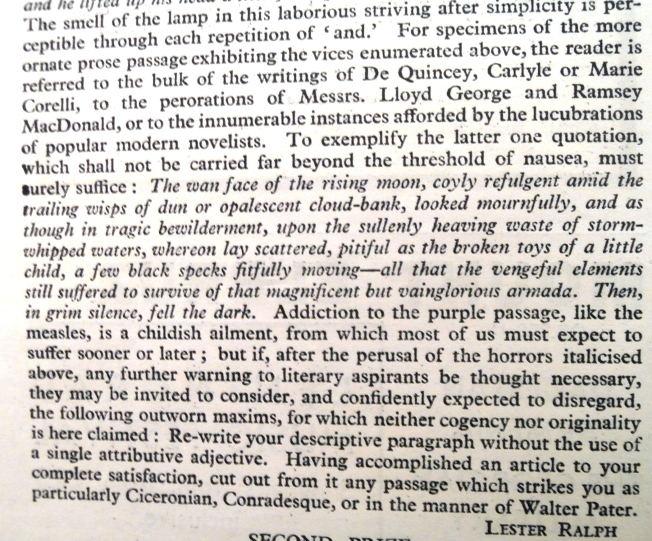 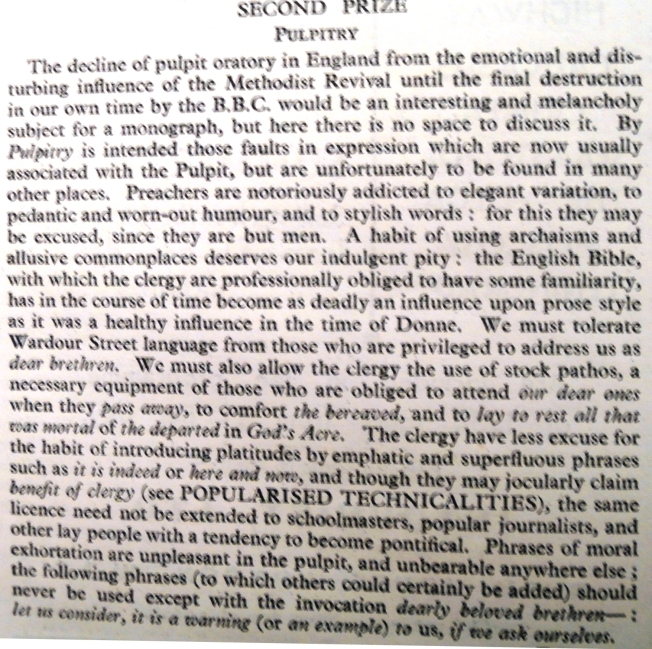 In Sterne’s The Life and Opinions of Tristram Shandy, the incompetent doctor, Slop, curses Shandy’s father’s servant, Obadiah, for tying the knots on his medical bag too securely (Slop is on hand to supervise the birth of Tristram, and Sterne is lampooning contemporary male attempts to reclaim the authority over birth from midwives). In fact Slop curses Obadiah by reading a Latin excommunication, which is then translated into English:

‘By the authority of God Almighty, the Father, Son, and Holy Ghost, and of the undefiled Virgin Mary, mother and patroness of our Saviour, and of all the celestial virtues, angels, archangels, thrones, dominions, powers, cherubins and seraphins, and of all the holy patriarchs, prophets, and of all the apostles and evangelists, and of the holy innocents, who in the sight of the Holy Lamb, are found worthy to sing the new song of the holy martyrs and holy confessors, and of the holy virgins, and of all the saints together, with the holy and elect of God — May he’ (Obadiah) ‘be damn’d’ (for tying these knots)—‘We excommunicate, and anathematize him, and from the thresholds of the holy church of God Almighty we sequester him, that he may be tormented, disposed, and delivered over with Dathan and Abiram, and with those who say unto the Lord God, Depart from us, we desire none of thy ways. And as fire is quenched with water, so let the light of him be put out for evermore, unless it shall repent him’ (Obadiah, of the knots which he has tied) ‘and make satisfaction’ (for them) ‘Amen.

All of which brings us to the new competition, and judge Ernest Betts. Betts wants a curse in a similar style ‘On Modern Times’. He teasingly adds ‘A Latin version is not essential.’ I think you might guess what will happen …

Southron, Redling (notice that they are together again), J.H.G.Gibbs, Pibwob and Lester Ralph get mentions, but none are felt to be ‘Shandean’ enough. The outright winner is Eremita, who has the cutthroat instinct to outdo everyone else by including a Latin version of his curse. The runner up is Olwen Lawton.

The runner-up here (note the surprising conflation of Hitler, Mussolini and Gandhi) was later to publish several romantic novels between in 1950 and 1958, from This Was My Star to Land In Peril. Her full name was Olwen Somerset Lawton (she inherited the middle name from her mother), born in Chorley, Lancs. in 1912 (so she is only 21 here). Her father was a draughtsman, and he had moved south by the time of this competition, where he can be found living with his Marjorie, Olwen and her brother at 1 Essendon, Sanderstead (near Croydon in Surrey). She turns up on several flights (The Canary Islands, Trinidad, Bermuda) before marrying a Jack K Davant in Nevada in August 1959. This seems to be the reason she stopped her successful run of publications. She died in San Diego in 2000. Her most successful novel seems to be Dorothea – which was at the very least translated into Dutch (I assume this means something like ‘Dorothea’s all-consuming love’):

On 10 March 1934, about a fortnight before this competition was set, the novelist and humourist Thomas Anstey Guthrie (b.1856) had died (see above). He wrote under the name F. Anstey (the result of a typographical error), and was a regular contributor to Punch, as well as a comic novelist (he seems to have stopped writing novels in the Edwardian decade. His best known novel is Vice Versa, but he had written a series of pieces called Voces Populi for Punch in the 1880s). Frank Sidgwick recalls an uncollected example of one of these, spoken by a ‘Hyde Park reciter’, who breaks off his tragic tale when he spots a penny in the grass:

Competitors are asked to continue for a further 12 and a half lines, bringing it ‘to a culmination’ or ‘a similar aposiopesis’.

One snag was that, when the competition was set, there was a misprint in the last line, which finished ‘I .. to ..’  This apparently threw some of the thirty entrants (one of whom sent in two). Sidgwick spends a long time analysing what he expects. As he sees it, ‘maddened ‘orses’ are redolent of the Wild West’, until we come to the word ‘buttercups’ . He goes on to deconstruct almost all the entries, and, as I can’t give a proper flavour of his commentary by summary, here’s an extract:

W.N.G. is the winner, but loses a half-guinea so that both E.W.Fordham and A.H. Grant can be runners-up. 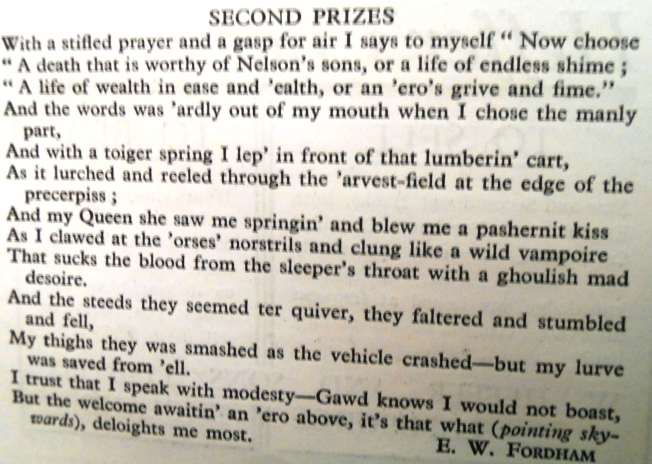 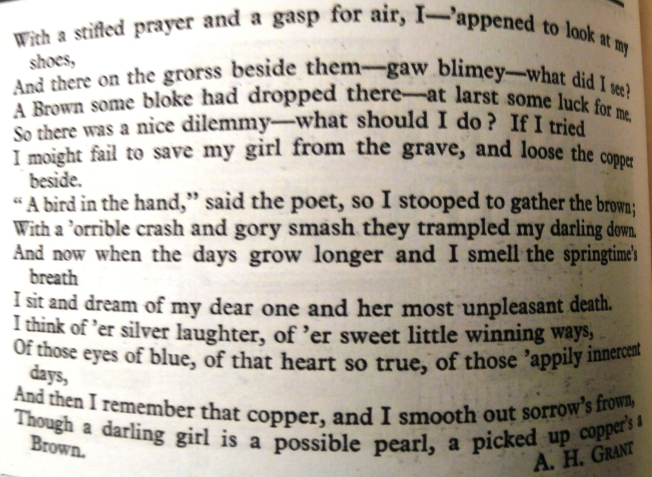 Humbert Wolfe, like on or two of his former WR colleagues, is apt to set incomprehensible competitions. Try this for size. You are asked to find an ‘ideal BBC programme’ for the following four occasions:

(i) a Cabinet meeting to discuss disarmament

(iii) ‘the long-postponed meeting between East and West’

I suspect that Wolfe had an idea of the winning answer (fatal). But none of the very, very few entrants has. H.C.M. is commended for having a shot, but this is written off as a catastrophe. No prizes are awarded (Wolfe has a poor try at saying it was his fault). He does however print a poem by Marion Peacock, on her refusal to enter.

In former days, says Richard Church, bucolic poets turned their attention to the milkmaid Amaryllis and wrote her poems. Now, he asks for a two-stanza lyric to a milking-machine.

This is a neat idea, although competitors then as now were just as sloppy in reading the instructions. Only seventeen addressed their poems to the milking-machine. The rest simply wrote about one. That made Church’s job relatively easy. One of the runners-up was Sir Horace (Cecil) Monro (1861-1949), a retired civil servant who had been Permanent Secretary to the Local Government Board, and had been given the responsibility of producing in 1920 a report on the Water Board. Monro had university-days links with Punch’s editor, Bertram Fletcher Robinson, so it’s not completely surprising to find him entering a light verse competition – he and Robinson had co-written skits in the 1890s. However, one suspects that he had not intended his name to be revealed – for Horace Cecil Monro has in fact been winning for quite some time (and was still winning after World War II). He’s ‘H.C.M.’.

The winners are Gerald Summers and Janet Jekyll. I can’t make up my mind whether the latter is a pseudonym – curiously, but not until a couple of decades later, a ‘Daughter of Jekyll’ film gave the daughter the name ‘Janet’. 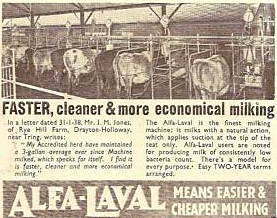 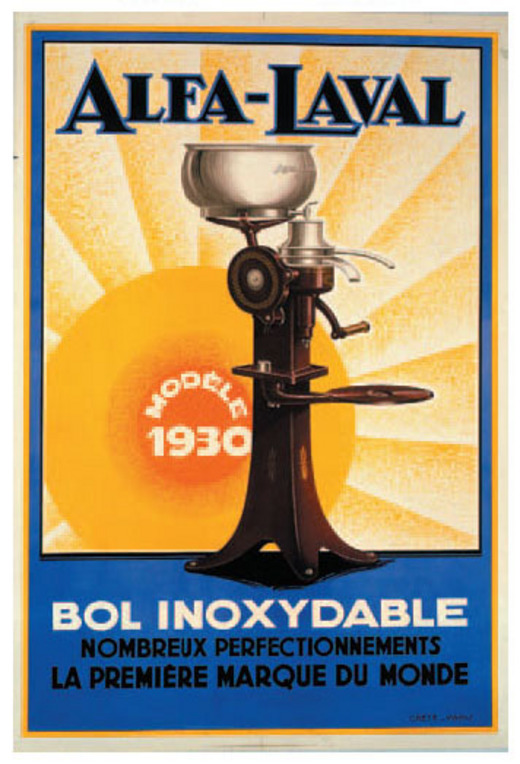 Although the instructions are a little hard to understand, Ivor Brown sets the first competition explicitly designed to twit experimental poetry. I think it’s pretty obvious that parody would have been better, but the competition has only dipped its toe into parody so far (although it is moving that way). The target here, I think, is Eliot, but more than Eliot, poets like Marinetti and Louis Zukofsky (explicitly mentioned, although mis-spelt), as well as the Sitwells. You can read a good article about Zukofsky here, and there are examples of his work (he spent his whole life composing a poem called A) if you scroll to the bottom of the article and click the links.

The competition is for a rhymed epigram on a very modern poet, who ‘having written what he believes to be totally cacophonous, unintelligible and unprintable’ finds himself praised as in the lyric tradition. It’s not very logical. A competitor who has been mentioned in dispatches, N.W. Hester, has his epigram quoted as best of the runners-up, who include Alice Herbert and also a Richard Thesiger (whom I believe to have been a civil servant, after the war in the Lord Chancellor’s department)

But the winners, who have the two and a half guineas split equally between them, so that’s 17s 6d each, are Michael Holland, Brice, and (it seems like a while since he’s won) Pibwob.

This is a dog of a competition, thanks to the setter R. Ellis Roberts (although I can’t help  recalling Kingsley Martin’s words about him – that he was the only writer whose work he loathed). For a start, has anyone heard of B.R.Haydon? No? They hadn’t in 1934 much either. He is Benjamin Robert Haydon (1786-1846), best known as a painter – including a well-known painting of Wordsworth – but also as a diarist. There is a volume entitled ‘B.R.Haydon and his friends’ that you can find and download here. No disrespect to him, but a bit obscure to feature in a weekend competition. And the competition is pretty off-putting anyway.

‘In a recent book on Charles Lamb,’ starts Roberts – could be James Lewis May’s Charles Lamb: A Study (London, 1934) or Edmund Blunden’s Charles Lamb and his Contemporaries (Cambridge, 1933) but probably the former – ‘the author states that Lamb was the ordinary man in excelsis‘ and that ‘he exactly conforms to the ordinary man’s view of the Ordinary Man’. That is such a bad sentence that I am very reluctant to attribute to Blunden, whom I admire. Anyway … Entrants are asked to ‘comment upon’ (comment!!!) these judgments either (a) in an imaginary conversation between Keats, Coleridge, Wordsworth, Haydon and Blake (not finished yet), taking as a model “the famous passage in Haydon’s diary about Wordsworth, Lamb and the Collector of Stamps”. Bloody hell! Still, there is (b) invent comments on the judgments by Mary Lamb, Dorothy Wordsworth, Coleridge, George Dyer, Thackeray or Charles Lamb himself. You’re allowed 400 words, by the way, or ‘fragments from something longer’. This is a competition for the hard nuts. (I hadn’t heard of Dyer either. He was a classicist and poet (1755-1841).) 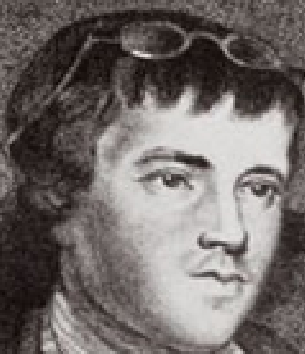 Roberts is surprised that the postbag is nearly empty. He blames the poor range of reading of the entrants. He expected people to attack the epithets in their droves, or even, whimsically to defend them. But a weekend competition is supposed to entertain the readers, not send them into a coma.

Still, you can’t say this isn’t educational. Wordsworth was ‘the Distributor of Stamps’ for Westmorland, – a post that consisted of supervising the collection of duties for all kinds of things – medicine, lace-dealing, pawnbroking, wills, insurance policies, stage-coaches (the list is very, very long, and he had a network of collectors). Effectively, Wordsworth was a civil servant. His boss (‘the Comptroller of Stamps’) was a man called Kingston and he did indeed have dinner with Wordsworth, Lamb and Keats, at Haydon’s house – where Wordsworth and Kingston were both subjected to some mockery for being officials. The date was December 28th 1817, and here is Haydon’s account. Prepare to split your sides. 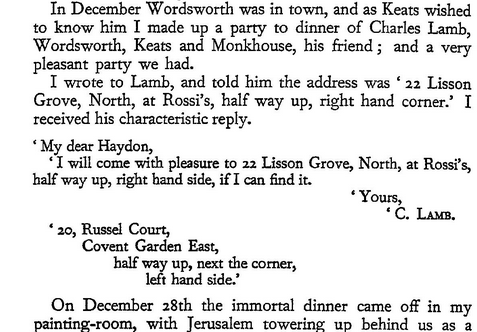 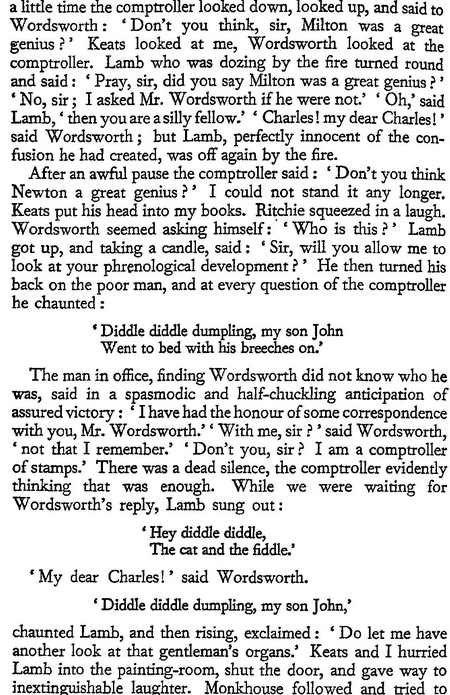 It is plain not everyone had this hanging about in their book-case. The winners are Joan Jukes and Non Omnia (the latter described as a he, when described as a she on the previous occasion). This is Joan Jukes’ first win; but she has come close. I suspect she may be a Joan Godwin nee Nightingale from Dorset, whose mother was a Jukes, and that she was born in 1876, but I can’t be sure. What I do know is that she had short stories published in anthologies throughout the 1930s, and is anthologised in good company – e.g. (this one is from 1938) 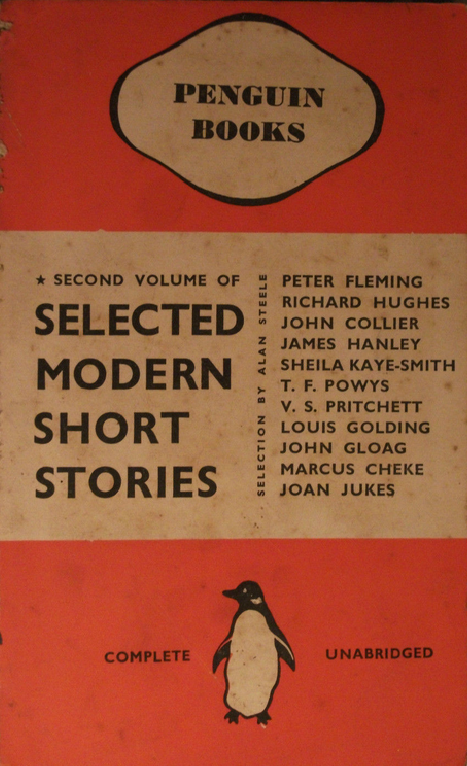 She has also read her Haydon, to be fair. 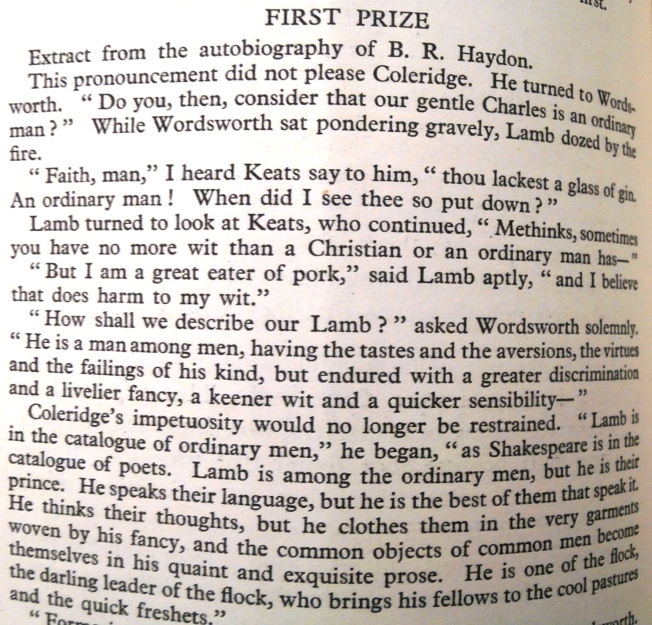 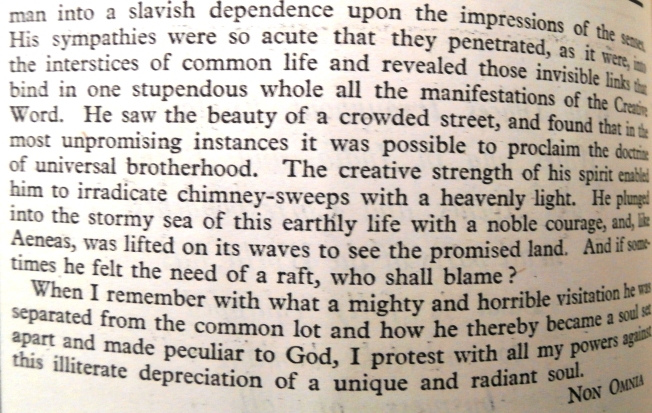