After 20 months, 177 people have won a competition in The Week-end Review  (or rather, 175 different names have appeared). Of these fewer than half – 85, to be exact – are allowing their names to be published. Exactly thirty hide behind initials, and 62 use pseudonyms. Because there have been just over 190 competitions, adding A to B, and remembering that Naomi Royde-Smith tends to set one, there’s an odd thing – there are about as many winners as there have been competitions (put it another way, everyone, as there are normally two winners for each, has won on average about twice). But some competitors are of course mopre equal than others.

In 1931, 108 people won 175 prizes to the value of £181 3s 3d. This included 38 who won a half-guinea once, 24 who won a guinea or a nearby sum once, 18 who won two guineas once, and two exceptional cases (both to do with Naomi Royde-Smith) who won three guineas once. So only twenty-six entrants won more than once.

Here then is the leader board, with the previous ‘year’ in brackets. I don’t think anyone will be surprised with the winner

Technically, the two three-guinea winners, Edward Marsh and Hilda Newman would come next, followed by W.G. and Guy Innes. However, since you can make the top ten by winning a top A competition prize just twice, it’s clear that the guineas have been handed out to the many, not the few. It’s the top four who are the exceptions who prove the rule – especially the indefatigable Seacape, whose strike rate is almost one in three. And it’s worth remembering that Seacape and Valimus are the ones who came from The Saturday Review  (with Pibwob, who is still moonlighting in his old haunts as well), and wrote the opening letter. The old gang are still setting the pace. W. Hodgson Burnet was no new boy either – he’d been winning competitions in the Saturday Westminster before World War One!

Of course, there are many who enter, it would seem, every week. Not just the all-conquering Seacape, but T.E. Casson as well. His total winnings are still only one half-guinea. At least it would have covered the cost of his stamps from Cumberland.

In the final competition of 1931, Ivor Brown points out that geology is the Cinderella of poetry, whereas ornithology and botany have plenty dedicated to them. So he asks for an Ode to Oolite        (24 lines max) … 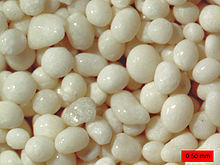 Ooids, which make up oolite

Apparently the Cenotaph is made of oolite, but the winning poems went an extra half-a-mile, and the old stagers sweep the guineas: Valimus and Seacape. 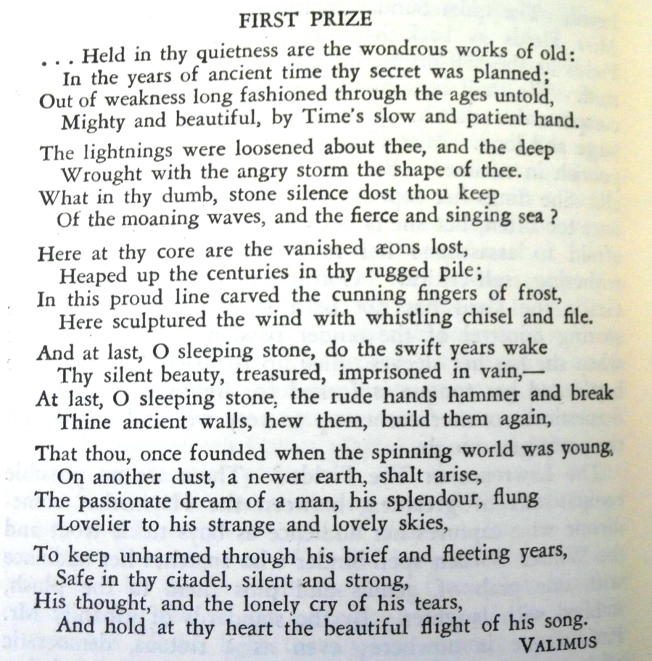 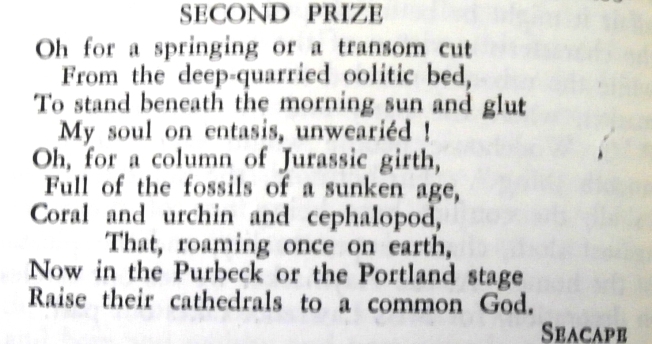 92B was for a four-liner on a ‘Treasured Joke Which Fell Dead’ – not easy, I’d have thought. There are several runners-up (T.E. Casson is a runner-up in both competitions). W. Hodgson Burnet, Heber, Mariamne, James Hall, Lyn Carruthers and Non Omnia are all just edged out by Jocelyn Lea (winner of 1B) and Cuniculus. 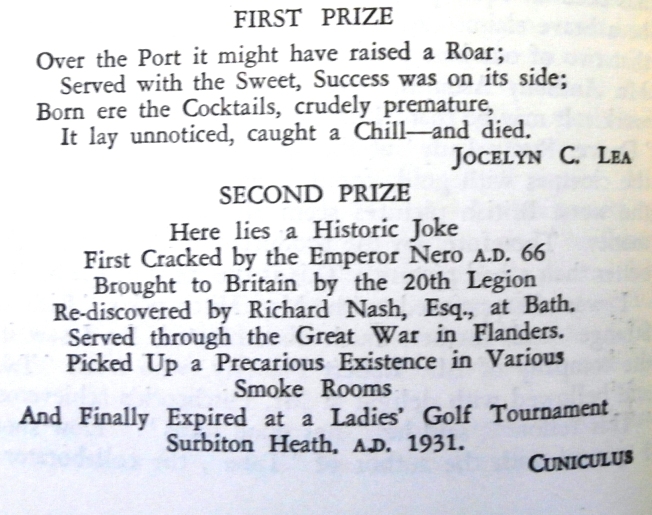 At which point, we have reached the end of the first complete year of the competitions, and it is time to get out the abacus.

It’s the Christmas issue (although there will be another issue before the New Year), so Thomas Earle Welby has set up a seasonal competition: how to cook a turkey, in rhyme. There are many runners up, including W.A. Rathkey, who can be found in periodicals in the 1930s, and composed this limerick:

G. B. Shaw wrote to Yeats: “P’haps it’s mad of me,
And I know that you folks with think bad of me,
But may I remark,
Before you embark,
That I am the Irish Academy.”

But the winners are Belinda and Lester Ralph. As Welby remarks, they’re eschewing the traditional roast turkey. He also woders how onions can be fried in mayonnaise, but drily comments that Belinda must have meant something else, as Shakespeare did in his difficult passages. I think I’d have problems with Ralph’s iced chicken cream. 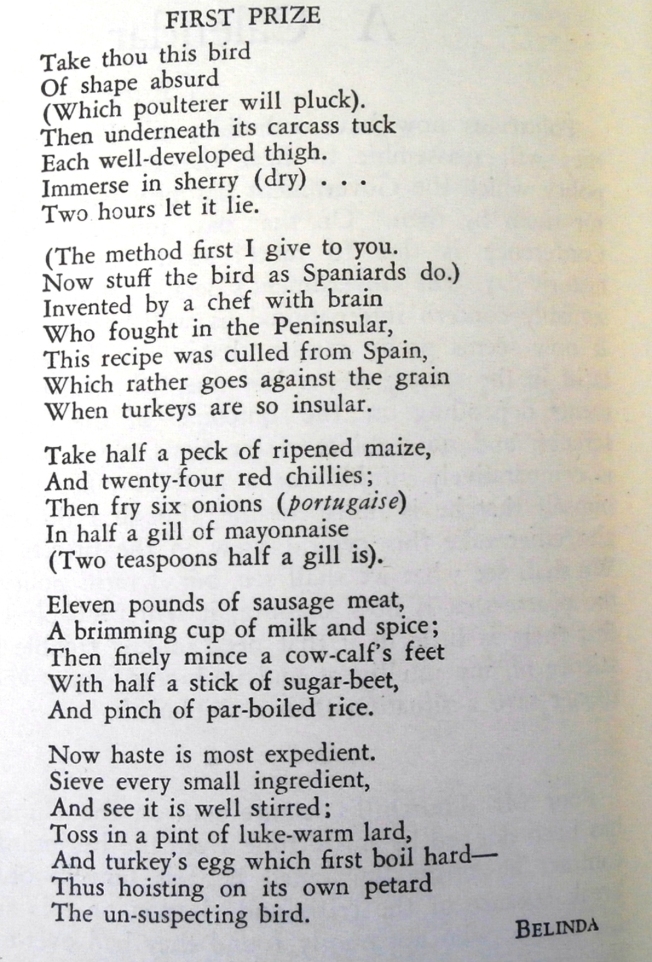 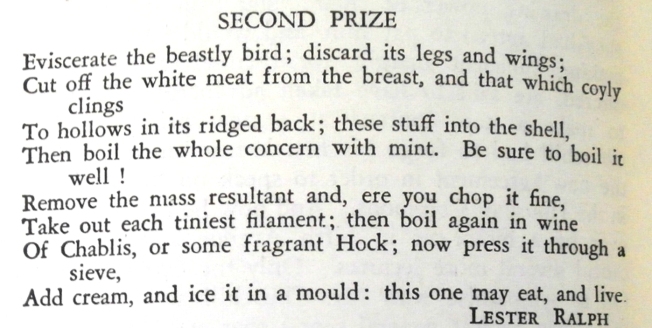 91B is a four-liner to celebrate surviving until Boxing Day. The entries are deemed a ‘poor lot’, but prizes are given to Heber and Seacape, the latter taking, as Welby notes, a bit of a gamble. (Welby was the editor of Landor’s collected poems, and Seacape is parodying Landor.) 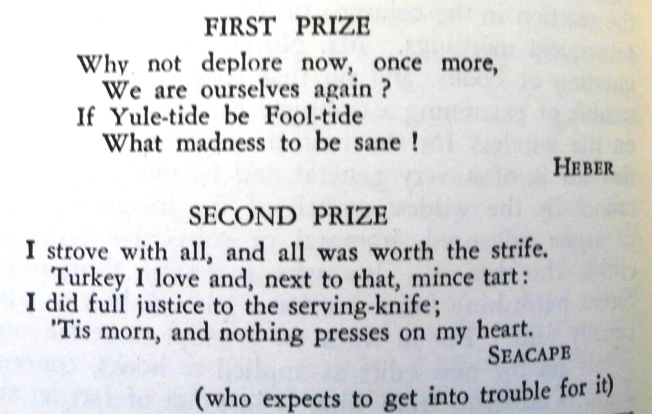 At last, some lighter relief! Anthony Bertram has set a limerick competition – on relativity or qantum theory… In a kind of parody of previous competition-setters who berate themselves for setting poor competitions, he cheerily tells us ‘What an excellent idea for a competition this was!’ He provides an example:

The nearest also-ran knew what he was talking about, although he was then only twenty – F.C. Frank (Frederick Charles Frank, later Sir Charles Frank). [Frederick Charles Frank, FRS came to Bristol in 1946, after distinguished wartime work in the Air Ministry intelligence service leading to an OBE and Knighthood. He was a founder of the modern theory of dislocations and of crystal growth and surface physics. He also predicted muon-catalysed cold fusion and created the theory of the elastic properties of liquid crystals (the Frank constants) and their disclination singularities. In the 1960’s he applied his expertise in solid state physics to bring fundamental new insight into several aspects of geoscience, including the curvature of island arcs. Sir Charles was Head of the Physics Department from 1969 to 1976 and was active in science until his death in 1998. – from a Bristol University site]. 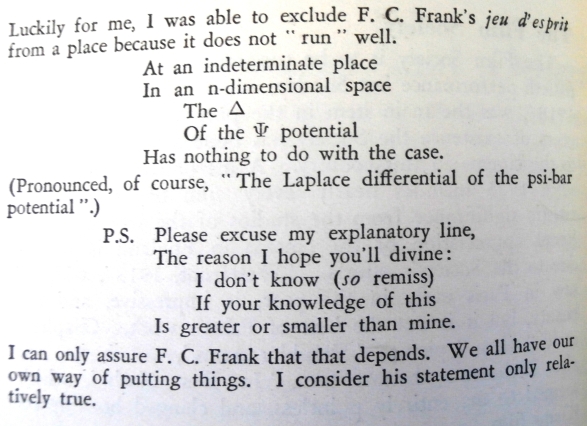 There are three winners (and a commended which gains no prize). The first three are Little Billee, G.M.Spooner and Norman L.Robinson, the latter Chauve-Souris. G.M. Spooner is Guy Malcolm Spooner (1907-1989), twenty-four at the time, and starting on a long and eminent career as a marine biologist working in Plymouth (he was a Devonian by birth) at the Marine Laboratory, but also something of an expert on insects in particular. Here they are: 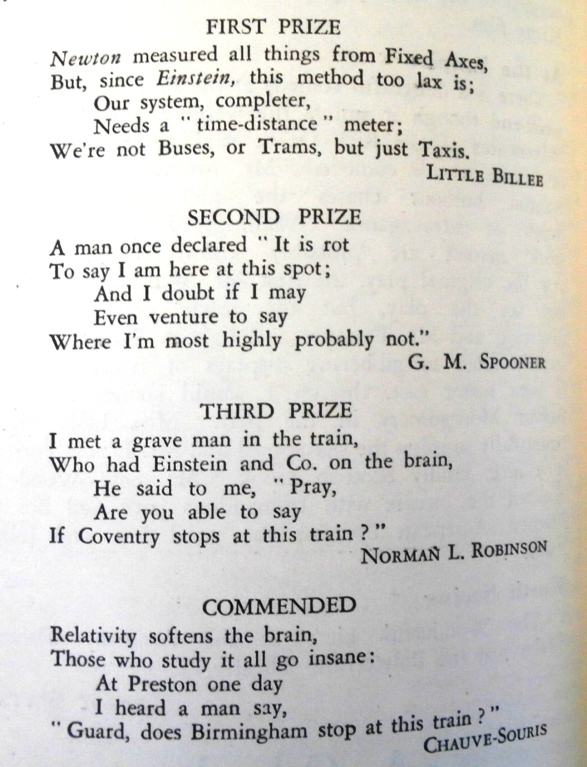 The B competition, which is to write a letter of complaint about the ‘This England’ feature, doesn’t go so well. A young archaeologist, C.H. – Charles Hamilton – Inge comes close, as does the Bristol historian, W.G.Neale, but the sole winner is D.H.: 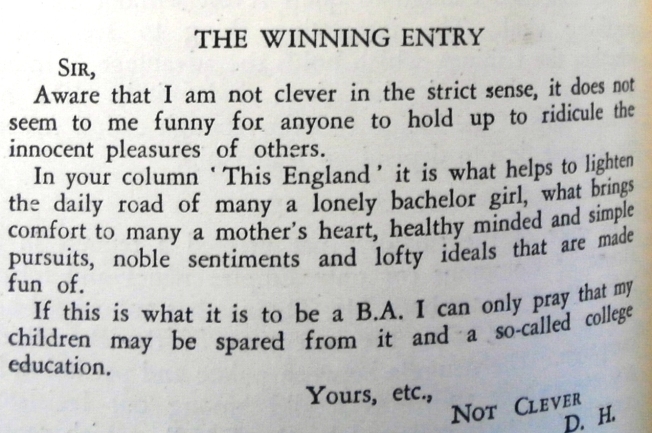 With two Bristolians and a Devonian all in the frame, this is a surprisingly successful week for the South-West!

Martin Armstrong (for this competition will wind up in the first December issue) sets the task of writing a poem, 12 lines long, either on or to a Christmas Rose, pointing out that for a rose, winter is summer and vice versa. (The B competition is to be a parody of three verses of ‘Maud’.) But the very mention of a Christmas Rose, remarks Armstrong, has thrown all the competitors into a state in which they are lyrical and humourless. He scraps the B competition, thinking perhaps that the competitors think Tennyson too sacred, which he doesn’t; in fact, he admits disliking ‘Maud’ very much.. Even Seacape is slapped down. Instead, he redistributes the money to create extra prizes, and there are four Christmas Rose poems. He doesn’t say how he distributes the money, but there are two guineas left for the three runners-up, so I’m assuming it was split into three by 13s 6d.

The first two into the winner’s enclosure are new names, with crisp Georgian poems. The first, Rosellen Bett, was 26 or 27, and the daughter of a fleet surgeon (possibly the fleet surgeon); the second is one Peri Cotgrave, whose gender I’m not sure about, but whose poetry collection The Little Centaur  (I presume for children) was published in 1936. The other two spots go to old hands: Valimus and Yury. 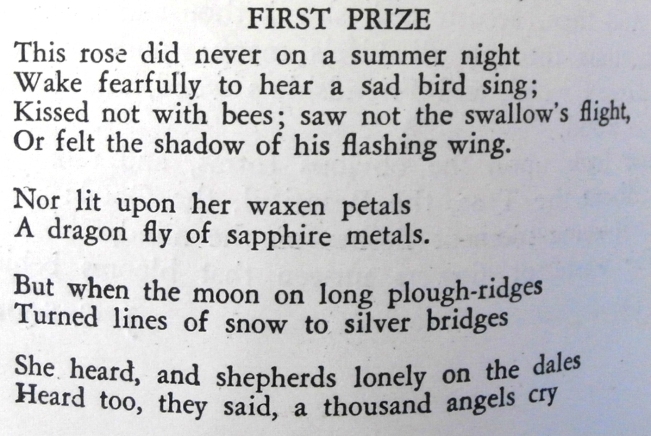 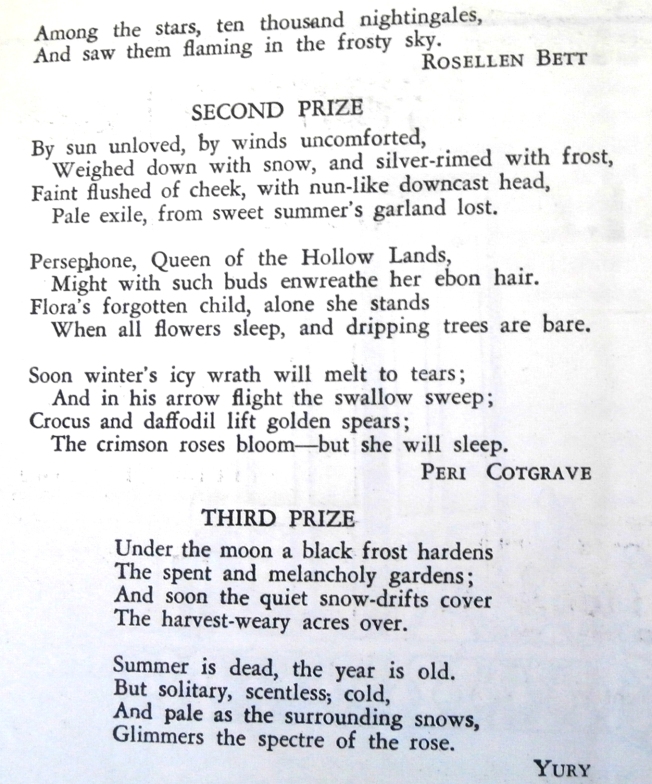 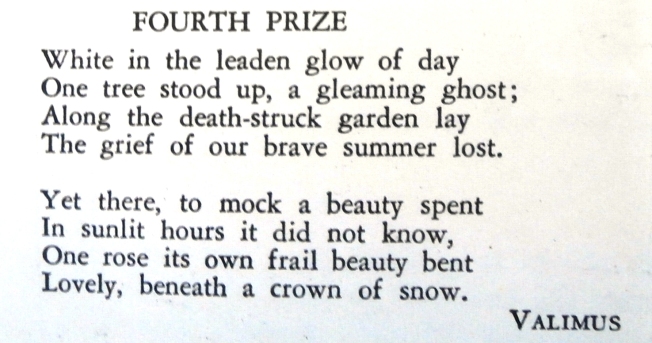 James Agate returns to the judge’s seat. After his highly grumpy adjudications in 53A and 53B, we might fear the worst. We would be right. It’s a really difficult, but verging on pointless competition, in which a piece of prose has to contain all of the following (as phrases): Chinese metaphysics; ‘pig’s whisper’; the Atlantic Ocean; Charlie Chaplin; Bolshevism; pyjamas – in any order, with 350 words as the limit (350! modern competitors have never been given more than 200, and their usual maximum is 150, or even 120). The audience intended has to be given.

Agate’s report excoriates the entrants who fail to know the meaning of a pig’s whisper. One of the unlucky and more inventive entrants is Henrietta Heilgers, a writer who as Louise Heilgers had had several novels published, and a colourful private life, which involved living with a bigamist whom she subsequently married (and had by this time divorced). There is a good description of her here and here.

A pig’s whisper, anyway, is a ‘very short space of time’. The many inventive ways round it included inventing cocktails called pig’s whispers. The winner uses the device of a school speech, and he (or maybe she, but at any rate a Northerner) is A.H. Ellerington:

The finest example of such a speech he’s ever seen, says Agate, tongue locked in cheek, I hope. The runner-up satirises Gerald Barry, and, Agate says, gets him right, prompting an editorial note (‘Does it?’). The parodist is W.B.: 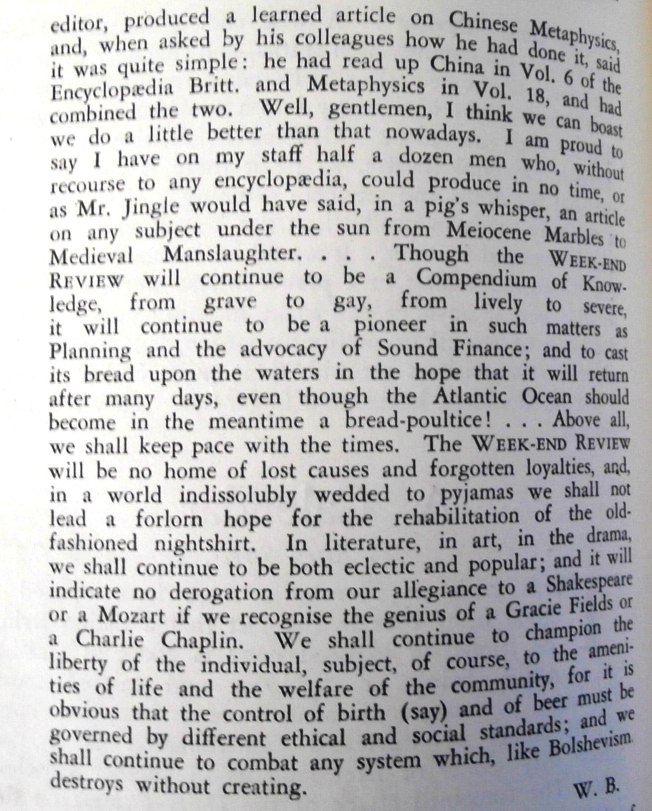 Compeition 88B is a fiend, and Agate is very dogmatic about it. Starting with the assertion that the opening of ‘Antony and Cleopatra’, with its reference to the general’s dotage, is the best example of cutting to the chase after Genesis (Genesis?!) – he actually says ‘cutting the cackle and coming to the ‘osses’ – he asks for six similar examples from Shakespeare of avoiding having to show scenes (as here in avoiding having to show Antony and Cleopatra meet). Agate – a little pompously – says that there are two blindingly obvious ones, that is, the death of Falstaff, and also (really weird choice) the avoidance of seeing when Macbeth broaches killing Duncan to Lady Macbeth. But doesn’t he do this in a letter?

The winner is Doris N(ellie) Dalglish, a London born writer (born in 1894), who published some academic work on Stevenson and Clough, amongst others, but who whose best known work was on Quakers. She was also a poet, turning up in The Spectator in May 1941 with a curiously flat poem ‘Holbein in 1940′:

I took the pilgrims’ way to Hayles this morning,
And what shone out to me, as memory groped
Among the allusions and the lecture-notes,
But Fisher’s face, John Fisher as Holbein drew him?
Magnificence wore many Tudor habits,
Choosing at random to endow a college,
To write sweet sonnets, man adventurous ships …

Never mind, she scoops the only prize. She has had, unsurprisingly, to fend off only six other entrants, who will surely have better ways to waste their weekends – 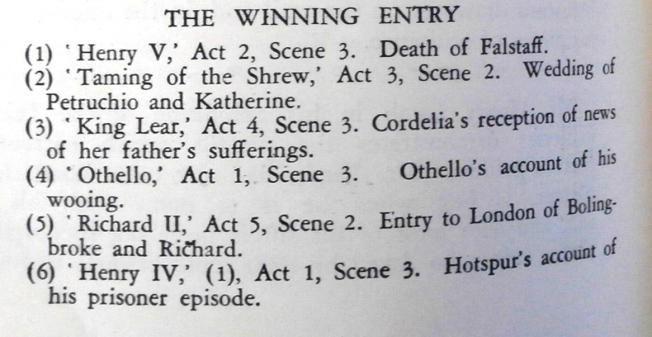